Roberto Lopez’s first visit to the Bentsen-Rio Grande Valley State Park included a sighting of land being cleared for the border wall right next to the hiking trail near the park’s entrance.

Lopez, an Edinburg native, said he was surprised to see construction so close to the park. 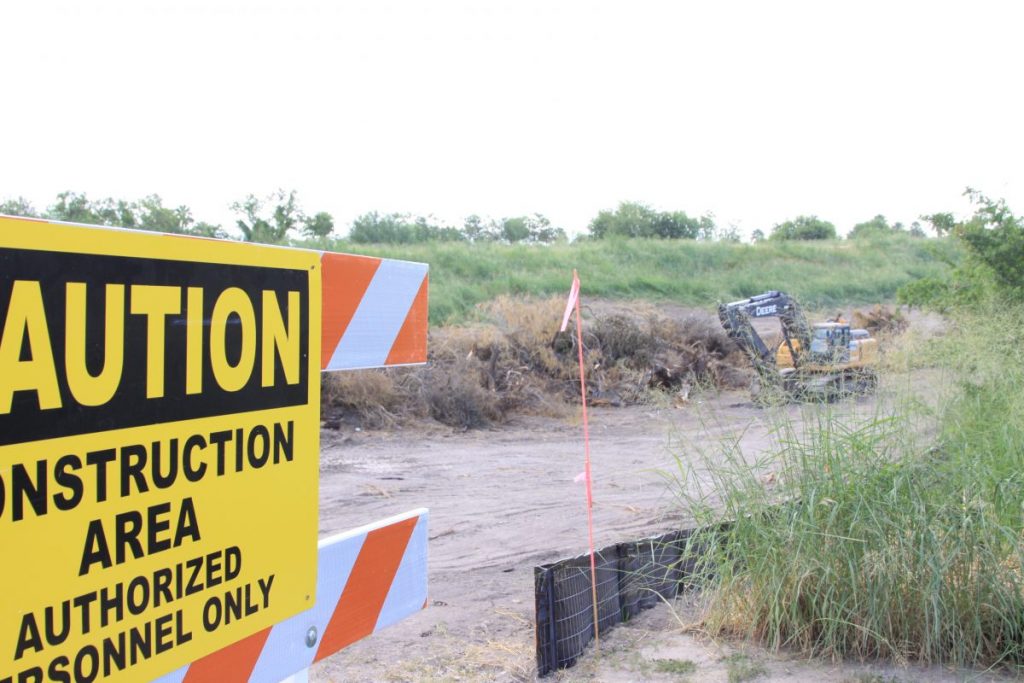 Land adjacent to the Bentsen-Rio Grande Valley State Park that has been cleared as part of a project to construct a border wall next to the park, Tuesday June 16, 2020. Progress Times photo by Jose De Leon III

“If it’s affecting the wildlife I don’t agree with it,” Lopez said. “This is a state park that should be preserved. You can secure the border by having more border patrol officers in the area. Why would you want to build a wall?”

The land clearing is pre-construction work for a border wall project. Visitors going near the park can see the trail next to the parking lot marked and labeled with signage warning people of construction in the area as the land south of the levee is cleared.

“CBP along with the United States Army Corps of Engineers have commenced groundwork activity such as clearing and grubbing east of Bentsen State Park. This is part of the RGV 03 border wall project which consists of 4.6 miles From Abram, Texas to Mission, Texas, however this excludes Bentsen State Park,” a spokesperson for the U.S. Customs and Border Protection said when reached for comment.

The spokesperson said an updated map of the construction project was not available but that the National Butterfly Center-located east of the state park, was also excluded from this project.

According to Cuellar, land located within the National Butterfly Center, the Santa Ana Wildlife Refuge, La Lomita Historical park, within or east of the Vista del Mar Ranch tract of

“This was a big fight, when we had the shutdown (last year), this language was the last thing to get added to the appropriations bill because people were fighting me on this. Now we’ll see if we can do this again,” Cuellar said Tuesday.

Cuellar said he believes that the construction is happening because the federal government are interpreting the language of their bill in a different way.

This is due to an April 30 ruling by U.S. District Judge Randy Crane that allowed surveyors access to land located adjacent to the Santa Ana National Wildlife Refuge for border wall construction. Crane said the land was not subject to the carve out by congress, and the border wall construction near the Bentsen state park is happening in an area not part of the carve out.

“Based on the interpretation of the bill, ‘within’ means that if it’s adjacent to the property then it’s not subject to this appropriation,” Cuellar said. “I put the word ‘within’ to protect these areas but it looks like they’re trying to build the wall as close as possible within the protected areas.”

According to local activist Scott Nicol, the federal government is taking advantage of the language in the appropriations bill to build the border wall as close as possible to the protected areas.

“It’s a loophole, the place they’ve bulldozed is between the visitor parking lot and it’s trail system,” Nicol explained. “Even if the strip of land between them is not owned by the state park, border wall construction in that area is still gonna have the exact impact on the Bentsen state park that it would have if the land was owned by it.”

The federal government is currently building a 30-feet-tall concrete and steel fence south of the levee which runs through the state park and can be seen east of it. The fence will destroy the natural ecosystem by preventing the levee from doing what it’s supposed to do, Nicol said.

“Every time there’s a flood, animals can cross north of the levee where it’s safer since south of the levee is a floodplain,” Nicol explained. “By placing a 30-foot-tall barrier, you’re trapping the animals there. The last time we had a huge flood in 2020, U.S. Fish and Wildlife pulled out several carcasses from animals that had drowned after they were trapped by the border fencing that was there at the time.”

The land clearing the United States Army Corps of Engineers has done has already damaged wildlife as trees that are home to local birds were torn down at the height of nesting season, Nicol added.

“CBP is clearly violating the will of congress by building a wall of any type in that location and ignoring the fact that Bentsen state park is north and south of that area,” Nicol said. “The fact that CBP seems so eager to tear apart places that the local community came out to protect is fundamentally offensive and shows they don’t care about the local communities.”

Cuellar shared Nicol’s concern with the border wall construction happening so close to the protected areas and said the construction is likely due to the current White House administration trying to build as much of the border wall as possible by the upcoming November presidential election.

“President Trump is fulfilling his campaign promise to build x amount of miles but in three years he’s only built two miles of new fencing,” Cuellar said. “He’s on a mission to fulfill this and the more we delay this the better this is. Hopefully in November there will be a new president and we won’t have to worry about this. If a new president is elected I will be submitting legislation to tear down or modify the fencing we have right now.”