Dr. Antonio Falcon, who has more than 43 years of medical experience, will now be the county’s health advisor after he was sworn in at a county commissioner’s meeting. 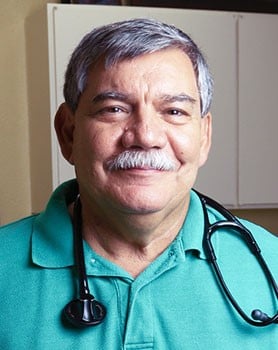 “I thank you for your confidence in allowing me participate in trying to heal our community over this disease that has afflicted us,” Falcon told commissioners. “We’re not out of the woods yet, you have all seen the numbers, there’s still several cases and I’ve had discussions with people to see how we can change the numbers.”

Falcon’s appointment comes after Dr. Jose Vasquez, the county’s former health authority, resigned after commissioners unanimously voted to deny a new contract from him that would’ve increased his pay from $500 a month to $10,000.

At the Monday meeting, Commissioner Eloy Garza questioned the need to pay Vasquez so much and said he had been in discussions with Falcon who said he would do the job for free.

“You said you’d do this job free of charge for the county and for anyone needing to recover you’d be willing for this money to be used for people to make this medical bills, are you still willing to do that,” Garza asked Falcon of his paycheck, who responded with a “yes.”

Falcon graduated from Baylor College of Medicine medical school in 1977 and has been a longtime resident of Rio Grande City since then. A 2016 article from the Texas Academy of Family Physicians named him the family physician of the year for his service to the community.

Falcon was recently appointed by Gov. Greg Abbott to the Council of Governors University Research Initiative, according to a news release from the county. Garza highlighted that relationship between Falcon and the governor at Friday’s meeting.

“Based on my experience with you as my doctor for many years, I know you have the capabilities and the connections with the Governor’s office to help us, am I correct?” Garza asked Falcon.

“I have connections with the governor’s office, that is correct,” Falcon replied.

Falcon said he has been in multiple discussions with other health officials to come up with ways to tackle the COVID-19 pandemic. Among them is a campaign with the local school districts to promote safety practices and protect the elderly, which make up the most cases of infections and deaths in the county.

“Right now we’re in a very serious time,” Falcon said. “You may not realize this but all the doctors are putting a lot of time into this. I may have to redirect some of mine from my own practice to the county but some of you who know me well know I am a hands on person.”