It was hard to miss the cacophony of fireworks at the La Joya ISD Stadium last Friday night, even if you didn’t have a front row seat.

On Nov. 13, 2020 attendees of a special called board meeting (held with social distancing in mind) as well as the residents within La Joya city limits witnessed the display firsthand. The seven-and-a-half minute surprise finale was intended to celebrate the one new board member and three incumbent members to the La Joya Independent School District Board of Trustees. 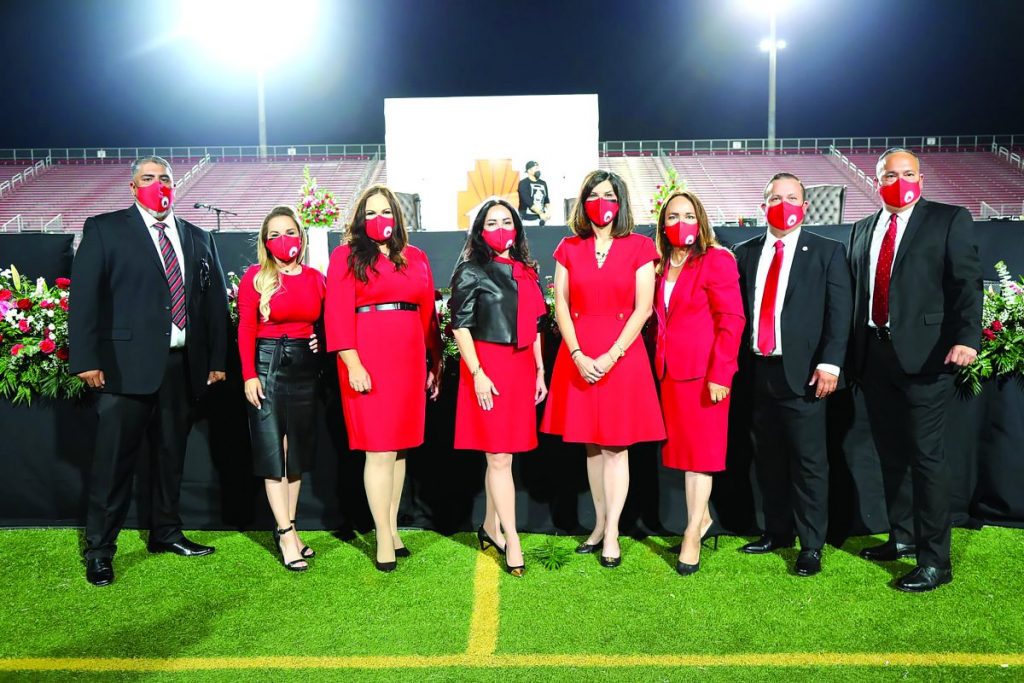 Those interested were also able to watch the meeting via Facebook, as the special meeting was streamed live. Supporters of the board filled the stands of the La Joya ISD Stadium, and the immediate family of board members were seated in rows on the field.

Donning sharp suits in black, red and white, the LJISD board and Superintendent Dr. Gisela Saenz sat in large chairs on a stage set up on the field. Saenz stated they have remained strong and united through the COVID-19 pandemic, and held a moment of silence for the valued employees who have lost their lives to the coronavirus this year: Andrea Marquez, a teacher at Palmview High School, Javier Ozuna, a member of the custodial department at Mendiola Elementary and Jose Joel Garcia, a member of the custodial department at Irene Garcia Middle School.

“These individuals devoted their time to improving the lives of our students and our community,” Saenz said. “We will miss them greatly.”

The first item on the agenda was the recognition of former board member for Place 4 Claudia Ochoa. Ochoa was unable to attend the event, but sent a message to Dr. Saenz to read out loud.

“I apologize for not being here tonight – I hope you understand that I chose to spend this moment with my family,” Ochoa’s statement read. “For those present tonight, please do not interpret my absence as a lack of interest towards tonight’s event, because I care so much about my La Joya ISD community, I wouldn’t have been able to get through this speech without becoming emotional.” 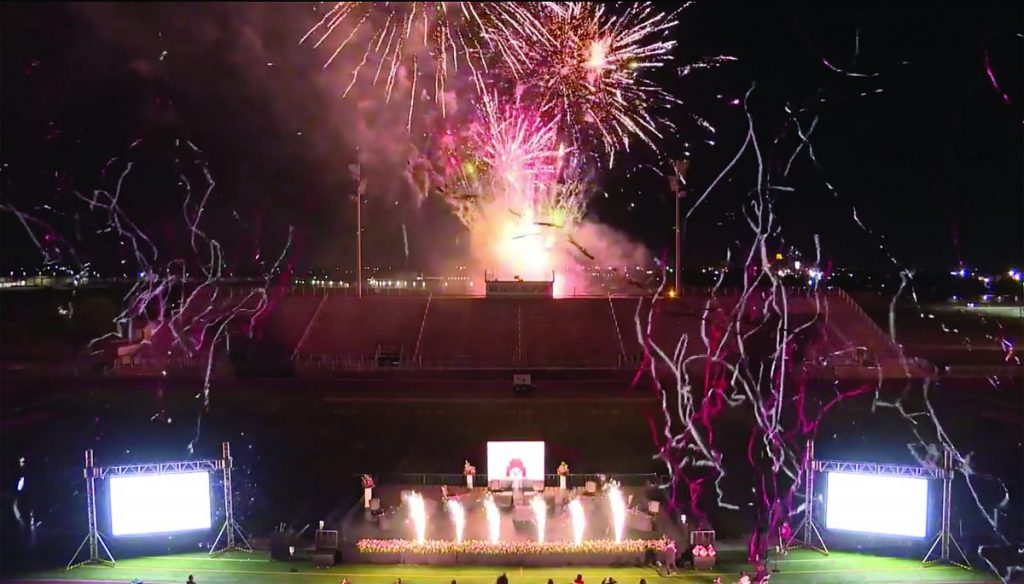 A screenshot of the fireworks display over the La Joya ISD Stadium last Friday in celebration of the new board of Trustees. Photo courtesy of La Joya ISD Facebook.

Ochoa thanked her supporters for their help throughout her campaign, and standing by her before, during and after the campaign and during her tenure. She said her love of public service has been reinforced, she looks forward to serving in other capacities and she wishes her successor nothing but the best.

“On behalf of our Board of Trustees, our district and campus administration, I would like to express my gratitude to Mrs. Claudia Ochoa for her service to our district,” Saenz said. “She has given much of her time and attention to ensuring that our students reach their academic goals, and our teachers have the resources that they need.”

Following Ochoa’s recognition, Saenz canvassed the election returns for the Nov. 3, 2020 School Board Election and declared the results. Saenz affirmed the total votes for each of the 12 candidates who ran.

After canvassing, the oath of office was administered to elected board members for Places 4, 5, 6 and 7. Each member was given time to speak following their swearing-in.

“He also told me that all ex-superintendents that run [for school board] win,” Benavides said. “I guess Sergio knew something that I didn’t. And he was right.”

Incumbent Armin Garza won the Place 5 seat, and was sworn in by Peñitas Mayor Rigo Lopez. Garza said he was going to give a speech like the ones he used to give as a coach for the district, and firstly thanked his family for being his inspiration as a public servant.

“At the end of every season I would give a speech about gratitude to my team, to the people who supported me,” Garza said. “They made whatever outcome, it wasn’t about me, it was about the effort that they gave. This is no different.” 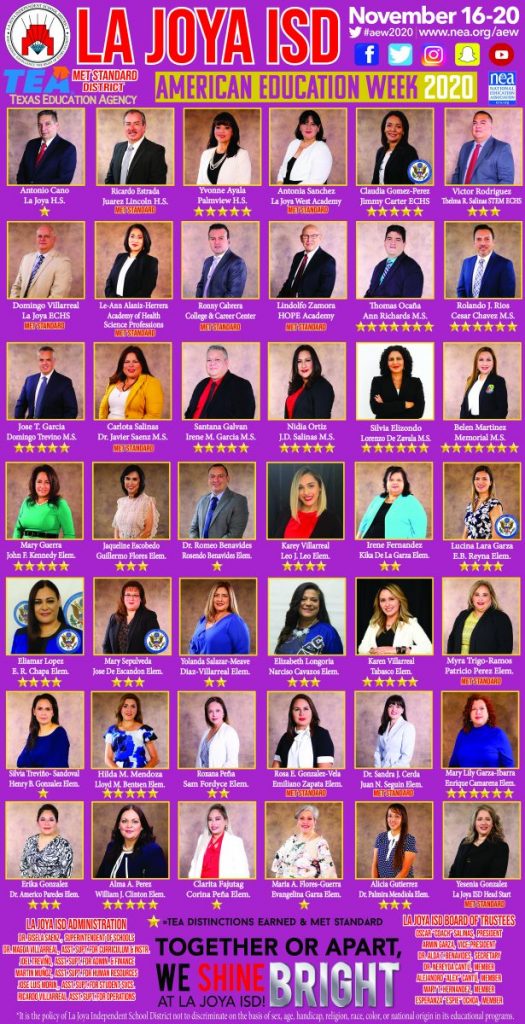 “I would like to give thanks to my Savior Jesus Christ for giving me ability, the strength and the time to be here in front of all of you,” Salinas said.

Incumbent Alejandro “Alex” Cantu won the Place 7 seat, and was sworn in by Hidalgo County Judge Richard Cortez, who noted celebrations and recognitions like these showed dedication to the district.

“I’d like to thank God for all the opportunities he’s been blessing us with, and all the people who came out and supported myself and the rest of the group I ran with,” Cantu said. “Now it’s not about one or two people, it’s about all of us working together. We’re in the middle of a crisis, of a pandemic, and at the end of the day we all have to work together to improve and be there for the community, for staff and most importantly for our students.”

Once the oaths were administered, the new Board of Trustees were invited to sit in the front row of chairs on the field, for a surprise gift. A video featuring the instrumentals, vocals, performances, academic, athletic and Career and Technical Education achievements of La Joya ISD Students was played as fireworks lit up the night sky.

The fireworks lasted over 7 minutes and 30 seconds. Footage of the students and faculty ran out, and various shots and clips of the Board of Trustees members wearing jerseys culminated with time with the loudest bang of the evening.

The fireworks seemed to be timed with the music – and from the stadium felt like they were literally on top of the viewer, a force causing the audience to collectively lean back. Once the display ended, it was met with cheers from the stadium. Board member Esperanza “Espie” Ochoa declared the meeting adjourned after presenting gift baskets to each board member.

“The journey just begins, we have a lot of work to do,” Ochoa said. “To all of you – keep safe, take care and God bless La Joya ISD.”