La Joya ISD may be signing on an agent of record to handle their health insurance, as ongoing litigation with Ruth Villarreal Insurance continues.

The La Joya Independent School District Board of Trustees held a special called meeting Wednesday Jan. 6, 2021 via Zoom. The board discussed an approval to authorize district administration to negotiate an agreement for the enrolling agent/agent of record for the district health insurance plan and voluntary health products.

Board Secretary Dr. Alda Benavides said she would vote for the item, but wanted to go on the record as stating she wanted a side-by-side comparison of the new plan with the previous one for the next called board meeting, where they will approve the contract.

Benavides said she wants to see where the district will save money, that the new plan be favorable to the district and not the agent and that it not be a long-term contract.

“[It should be] similar to what other districts do, that it be a simple contract,” Benavides said. “It should include provisions that protect the district, not the agent. I want us to see the comparison side by side at the time that we approve the actual contract.”

Board member Espie Ochoa said she was in agreement with Benavides’ request. Board member Alex Cantu voted against the approval, stating there are a lot of unanswered questions. 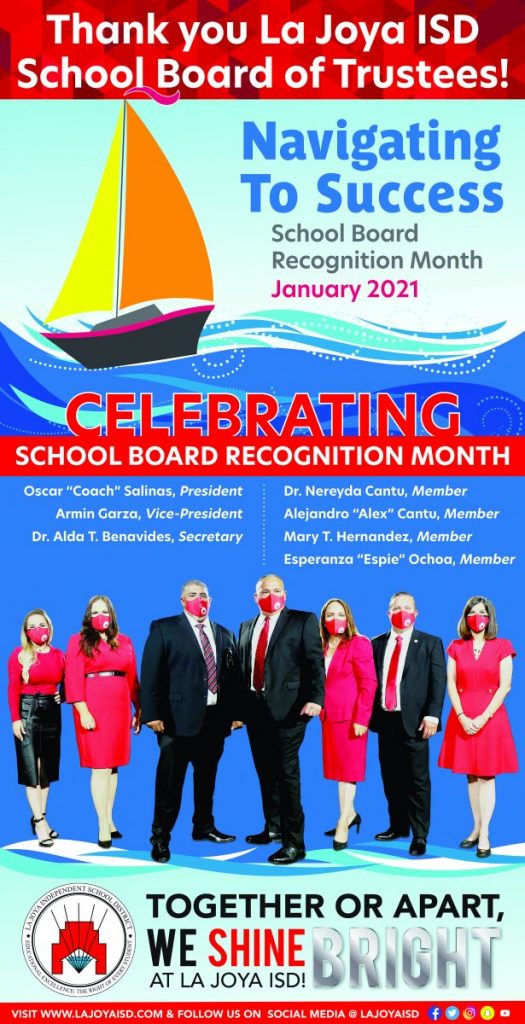 During this week’s meeting, Cantu added that he was in agreement with Benavides’ request to see the comparison between the two agents.

“There’s no uncertainty how this lawsuit’s going to go,” Cantu said. “I think, as a district, on my end, we should wait and ask more questions to see those comparisons to make sure that we’re saving taxpayer’s money.”

Cantu said LJISD still needs to pay attorney fees and hire a new agent of record. Board member Mary T. Hernandez abstained from voting, also saying there are unanswered questions regarding the litigation that she would like answered.

Board President Oscar “Coach” Salinas said the item would pass, and Superintendent Dr. Gisela Saenz would prepare the comparison for the next meeting, and have reasoning behind the change in agents and what can be avoided in the coming process to answer Cantu’s questions.

“Just to clarify, what is being approved right now is the ranking, and authority for administration to negotiate with the highest-ranked company on the pricing,” Saenz said. “At the next meeting, we will bring the pricing before the final contract is approved by the board.”