Happy to be reunited with his family, Lieutenant Javier Ramon returned to Mission and was greeted by a surprise parade of law enforcement agencies.

Ramon, who has been in San Antonio’s Brooke Army Medical Center after testing positive for COVID-19 last summer, was able to come home this Saturday, Jan. 23, 2021. After being picked up by his family, he was escorted to the Mission Event Center, where a major surprise was in store. 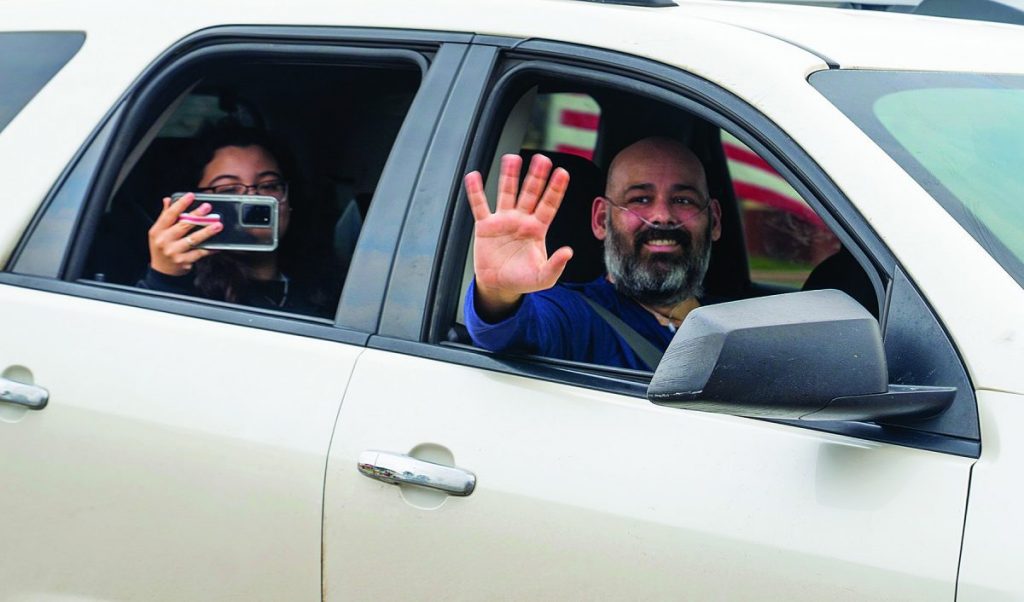 Police Lieutenant Javier Ramon waves to supporters and family after being surprised with a homecoming parade following his recovery from COVID-19. Photo courtesy of the city of Mission Facebook.

Law enforcement agencies from at least 13 entities – including Mission, La Joya, the Hidalgo County Sheriff’s Office, Weslaco, Edinburg, U.S. Customs and Border Patrol and U.S. Immigration and Customs Enforcement – lined the road in front of the event center, under a large American flag hoisted by the Mission Fire Department. As Lieutenant Ramon drove in, he soon discovered the parade that would take him by his home away from home: the Mission Police Department.

“It was very humbling,” Javier Ramon said. “I kind of had an idea, being a police officer, but I didn’t know the magnitude of the parade. It was really great and heartfelt, and it made me feel really good and special.”

Ramon was transferred to different hospitals throughout his battle with the coronavirus. According to him and his wife, Edith, he stayed at the Mission Regional Medical Center before being transferred to Doctors Hospital at Renaissance.

At DHR, it was soon discovered that Ramon’s best shot at recovery – an ECMO (Extracorporeal Membrane Oxygenation) machine – was not available anywhere in the region. ECMO technology does the work for lungs and/or the heart of a patient struggling with severe illnesses, and allows their own organs to rest and recover.

“It’s really sad that here in the Valley we don’t have that type of equipment,” Edith Ramon said. “San Antonio was the closest place we could get him to an ECMO machine.” 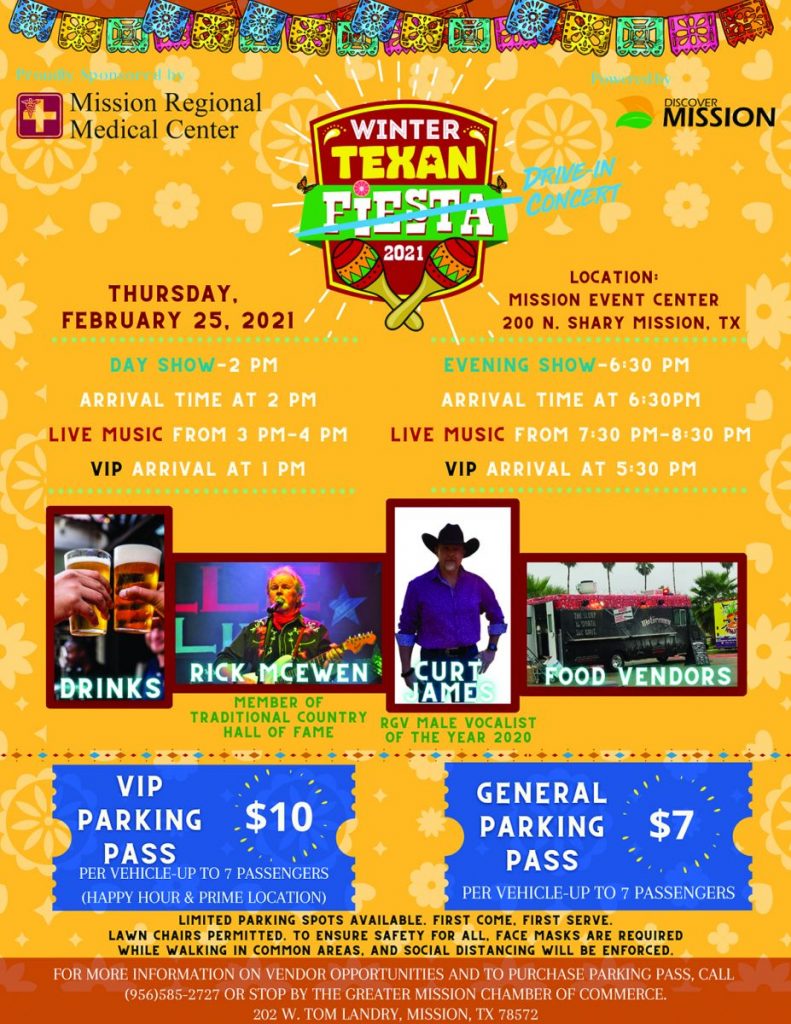 Desperate, Edith and the team at DHR began calling every hospital in the state, trying to find a place that would take her husband. Ramon got rejection after rejection, until Edith was able to get in contact with State Representative Sergio Muñoz, Jr. and Congressman Henry Cuellar.

After waiting, Lieutenant Ramon was able to be transferred to the Brooke Army Medical Center BAMC because Ramon served as a U.S. Marine for six years. BAMC made an exception for Ramon, because he qualified for the use of an ECMO machine.

Doctors from BAMC drove an ambulance to DHR on Sept. 5, 2020, connected Ramon to a portable ECMO machine and took him to San Antonio, where he would continue to fight COVID-19 at BAMC, then the Post Acute Medical Hospital.

Throughout all his stays at the hospitals, Ramon was plugged up with tubes from every angle, and dealt with a collapsed lung, isolation and depression. At one point, he coded and had a cardiac arrest.

Ramon was dead for seven long minutes. One doctor called and attempted to convince Edith to sign a “do not resuscitate” form, and she refused.

“I was like ‘no, I’m not going to give up,’” Edith Ramon said. “‘If he’s okay right now, I’m going to keep on fighting for him.’ That put a toll on me, but I stuck to it. I said I was not giving up, and they [doctors] would have to fight for him. Finally, I just hung up on her.”

Javier Ramon is grateful that he did not lose any memory or brain function after being dead for such a period of time.

“Any longer, I could have stayed a vegetable,” Javier Ramon said. “By the grace of God, I was able to recover from being down for that long.”

The time being completely alone was incredibly difficult for both Javier and Edith – though Javier says Edith had it harder.

“She was seeing me dying, in bed, in the Intensive Care Unit,” Javier Ramon said. “It was somewhat painful, but it was nothing a little morphine couldn’t fix. She had to deal with the stress and pressure of getting me the proper care, because I couldn’t speak for myself.”

As he lay there, only able to watch television, Lieutenant Ramon noticed that the clock was on the wall right next to the set.

“Time went so slow,” Javier Ramon said. “I couldn’t have any visitors. It was just a long process. I’d be watching TV and looking at the clock. I thought it was an hour, and it had only been 15 minutes. Imagine that for two months, with pipes in and all over the place.”

After recovering, Ramon was taken to the Warm Springs Rehabilitation Hospital in San Antonio, where he stayed for two more weeks. Since recovering, Ramon still deals with the scars, as well as breathing, heart, and kidney issues. He makes regular visits to local doctors and is in physical therapy to help in his healing process.

Ramon is also dealing with “drop foot,” because he was reclined in a bed for so long. His feet went numb, so he can push down with his toes, but cannot lift his feet up.

“That’s big, because that is what helps you walk and keep your balance,” Javier Ramon said. “Without that upward motion, I have a hard time walking.”

To give himself the best shot at a full recovery, Ramon is keeping his diet clean and avoiding soda and alcohol.

“It’s been a hard battle since [recovering],” Javier Ramon said. “I still can’t walk properly, I have to teach my feet to walk again. I’m pretty much like a baby, I’m starting fresh and have to learn how to do all these things all over.”

He was glad to come home to his wife Edith and their two children – Emily, 16 and Christian, 12.

“Just knowing that he was coming home, I just wanted to drop to my knees and thank God,” Edith Ramon said. “Finally, I heard he was out of the woods, and it was like ‘thank you Jesus.’”

Edith said their son has been markedly better since his dad came home.

“They’re ecstatic having Dad back home, they’re happy and loving it,” Edith said of her children. “My son even said a day before we went to go pick [Javier] up, ‘Mom, I feel different.’ I said, ‘Why?’ He said, ‘I feel good, Mom.’ I asked him if it was because his Dad was coming home, and he said ‘Yes, Mom.’’”

After picking up Lieutenant Ramon, Edith and their kids drove him to the Mission E

“With the spread of disease, obviously there have been so many people who have passed away, and that’s the difficult part in these types of situations,” Mission Police Chief Robert Dominguez said. “We’re glad that he’s one of those success cases, that he’s coming back.”

Ramon is a 27-year veteran with the police force. Dominguez was grateful to see so many law enforcement entities take the time to join in their celebration.

“We’re elated to see the support from federal, state and agencies from around the Rio Grande Valley here with us today as we welcome him back,” Dominguez said. “Obviously he still has a long way to go as far as rehabilitation, but at least he’s out of that danger zone.”

Dominguez said it is only a matter of time before Ramon gets his strength back.

“Hopefully at that time he’ll be able to come back to the police department and continue his work with us,” Dominguez said. “More than anything, I want to thank the citizens of this great community, the Rio Grande Valley and our business community. There’s just so many people who have made fundraisers for the family, for Javi, and it’s just astronomical the support he’s gotten and we have gotten as an organization. It’s beautiful to see the community come together like this for our officer.”

Mission Mayor Dr. Armando O’caña said it is important to support the police, in these times especially.

“God is good, because with the power of prayer, we are able to come together as a community and send prayers to Lieutenant Ramon and bring him home,” Perez said. “It’s an exciting day, and I get chills because it’s a long time coming. It’s a blessing.”

“I’m just so glad he’s on his way home,” Gonzalez Garza added. “I just want to let the Ramon family know that we missed him, we love him, and we’re praying for him daily.”

Civilian attendees of the parade wore t-shirts with Ramon’s name on them, excited to see the Lieutenant return to Mission. Ramon said the outpouring of support and prayer from everywhere was powerful enough to pull him through his battle.

“It’s going to take another, my guess, three to six months before I can return to work,” Javier Ramon said. “I love my job, and I want to get there today, but I know that this is not something I can get to in two weeks. The body is the body, it’s a strange animal.”

The Ramon family has advice for people on the outside, who don’t fully understand the implications and long-term effects of COVID-19: follow the rules, and pray every day.

“Wash your hands, wear your mask, take a bath when you get home so you don’t spread it. If you don’t have to go out, don’t go out,” Ramon said. “The most important thing for us is prayer. I hadn’t realized how many people prayed for me. Prayer doesn’t hurt – whether you believe or don’t believe. The power of prayer is great.”