Cantu filed a lawsuit, claiming the election had been tainted by fraudulent mail-in ballots and improper voter assistance. After a three-day trial in May 2019, state District Judge Federico “Fred” Hinojosa Jr. sided with Cantu and ordered a new election. 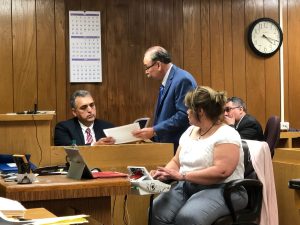 The 13th Court of Appeals reversed that decision on Thursday — a big win for Arjona.

“I’m very glad, very thankful, that we came out ahead,” Arjona said.

Cantu, a Pharr firefighter, had previously served on the school board. Arjona, the San Juan city manager, had also served on the board for years.

When the polls closed, just 43 ballots separated the candidates.

Arjona had 1,007 votes, according to results published by the Hidalgo County Elections Department. Cantu had 964.

After he reviewed the results, Cantu thought something looked strange.

About 51% of people who cast ballots during the 12-day early voting period and on Election Day supported Cantu. Arjona, however, received support from 79% of people who voted by mail.

Two other candidates who supported Arjona had similarly lopsided results among people who voted by mail.

Cantu also knew that Arjona’s wife, Sylvia, had been charged with providing unlawful assistance to voters during the June 2016 Hidalgo City Council runoff election. She pleaded not guilty.

Concerned about voter fraud, Cantu filed an election contest. The case went to trial in May 2019.

A significant portion of the testimony involved voters who received assistance at the polls.

State law allows voters with a “physical disability that renders the voter unable to write or see” and voters with “an inability to read the language in which the ballot is written” to request assistance marking the ballot.

Campaign workers, though, frequently assist people who aren’t familiar with electronic voting machines. Some assist dozens of voters during a single election.

Attorney Gilberto Hinojosa of Brownsville, who represented Cantu, quizzed voters about why they requested assistance.

While many voters admitted asking for assistance, they said nobody told them who to support.

Gilberto Hinojosa argued that wasn’t a valid reason to request assistance and urged the judge to void their votes. Attorney Ric Gonzalez of Edinburg, who represented Arjona, disagreed.

The judge sided with Cantu and voided 52 votes, including ballots cast by 16 people who received improper assistance.

After reviewing the trial testimony, the 13th Court of Appeals disagreed.

The evidence showed “most of the sixteen voters testified that the only ‘assistance’ they received was from either an election or campaign worker showing them how to operate the voting machine,” according to the memorandum opinion published Thursday. One person testified “that the voting machines that were used at the Pharr library, where all of the sixteen individuals voted, were ‘new’ machines and she was unsure how to operate them without being shown.”

The 13th Court of Appeals also cited a case that drew a distinction between providing general instructions and marking the ballot for a voter.

“To interpret the statute any other way would hold that any advances in technology and teaching voters how to use that advanced technology would be ‘assistance’ under the election code, thereby rendering their votes invalid,” according to the opinion.

The 13th Court of Appeals determined 16 ballots had been improperly voided. As a result, Cantu hadn’t disqualified enough ballots to change the election results.

Arjona said he felt vindicated by the decision.

“We didn’t do anything wrong,” Arjona said.

After the trial, Arjona said he heard the process of being subpoenaed and forced to testify convinced many people to stop voting. They felt harassed and deeply uncomfortable anwering questions about how they voted.

After she died in September, the family of longtime Hidalgo resident Maria de la luz Alcala mentioned the trial in her obituary.

“The only time I ever saw Aunt Mary very mad is when her sacred vote was contested by a ruthless Hidalgo politician claiming that my aunt had alzheimers,” according to the obituary. “She said and I quote her, ‘What people will do for supposedly a public servant vote; lying about my mental ability.’”

“I respect whatever decision they took,” Cantu said. “And if they feel those people were assisted legally, it’s fine with me. I’m not going to go against the judges. I respect the court.”