Starting April 22, 2021, Aeromar, Mexico’s foremost regional airline, will provide scheduled nonstop service from McAllen International Airport (MFE) to Monterrey International Airport (MTY). Along with today’s new route announcement, Aeromar commemorates its eight‐year anniversary of operating nonstop service from McAllen to Mexico City. “We are very proud to announce our new route to Monterrey, and equally important, to celebrate eight years of a great success story in McAllen that started on March 18, 2013. We are grateful for the support and trust from City leaders and the community, which has been instrumental in continuing to build up Aeromar’s presence in McAllen” stated Danilo Correa, Aeromar CEO. “Even in these challenging times, we remain committed to enhancing the connectivity between Mexico and McAllen, with our regular schedule increasing to eight weekly departures and two routes now in place from April 22” 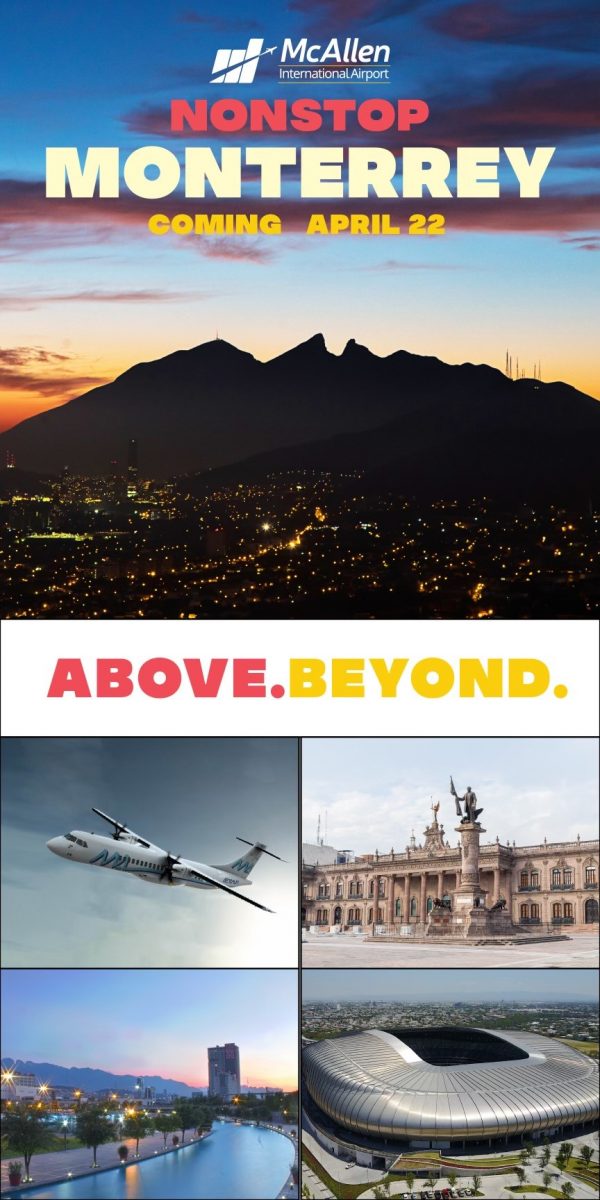 The flights will operate year‐round, initially on Thursdays and Sundays, featuring state of the art ATR 72‐600 equipment seating 72 passengers. They will depart McAllen at 13:15 and arrive in Monterrey at 14:15. Return flights will depart Monterrey at 15:10 and arrive in McAllen at 16:10. Introductory promotional fares will begin at $118 dollars one way, inclusive of all taxes and fees.

The new route also marks Aeromar’s return to Monterrey, a vibrant metropolitan area that offers visitors a vast array of cultural experiences and represents a key business connection for industrial and manufacturing clusters in North America. Whether it is for family, business or a quick shopping trip, McAllen is the traditional destination of choice for many in Monterrey and its surrounding communities. “The relationship between our communities is a strong one that is based on a unique socioeconomic bond,” said McAllen Mayor James E. Darling. “Our airport is facilitating these strong international connections. We are grateful for our partnership with Aeromar and we are excited about our newest nonstop route to Monterrey.”

“It is an exciting time for our City and our airport. We have worked hand in hand with Aeromar for many years to bring this project to fruition.” said McAllen City Manager, Roel “Roy” Rodriguez, P.E. “This new nonstop route to Monterrey will have an important impact on our communities, as it will strengthen business, family and tourism ties which have faced many obstacles during the pandemic. Congratulations to Aeromar on your eight‐year anniversary, on this new route to Monterrey, and on your future growth in McAllen. We are proud to partner with you and to be part of your success.”