A federal judge agreed to delay sentencing a local pharmacist Tuesday “so that he can finish up doing the things he’s working towards to help his situation.”

“Mr. Espericueta has been doing a lot of things to benefit himself and the government,” U.S. District Judge Randy Crane said Tuesday morning, when Espericueta appeared before him for sentencing.

More than 40 people wrote letters to the court about Espericueta, which Crane reviewed as part of the sentencing process. Another 20-odd people showed up to support him Tuesday. 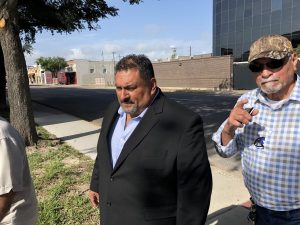 Omar Espericueta, 49, of Palmhurst (center) left the federal courthouse in McAllen on Tuesday morning after his sentencing was rescheduled. (Photo by Dave Hendricks / The Progress Times.)

When the case against Espericueta was called, however, Assistant U.S. Attorney Andrew Swartz asked to approach the bench.

Crane asked if a bench conference was necessary or if Swartz could just speak cryptically about anything sensitive. Swartz said he wanted to approach the bench.

After the bench conference, Crane agreed to delay the sentencing for at least another three months.

What, exactly, Espericueta did to benefit the government remains unclear.

The indictment charged them with participating in a scheme to submit fraudulent health insurance claims to Blue Cross Blue Shield of Texas for pain patches and scar creams.

“Due to the high reimbursement rate paid by BCBS for pain patches and scar creams, defendants and their co-conspirators targeted entities and employers throughout the Rio Grande Valley that provide employee health insurance through BCBS, such as the City of Mission, City of Pharr, Frontera Produce, and Point Isabel Independent School District,” according to the indictment.

Espericueta and Elizondo provided the employees with free food, according to the indictment, and asked for their health insurance information.

After collecting the information, Espericueta and Elizondo paid kickbacks to a doctor who wrote fraudulent prescriptions for the pain patches and scar creams.

They submitted nearly $1.8 million in fraudulent health insurance claims, according to the indictment.

Espericueta and Elizondo pleaded guilty to conspiracy to commit health care fraud. As part of the plea agreement, they promised to pay nearly $1.5 million in restitution to Blue Cross Blue Shield.

Motions to delay the sentencing hearing were filed under seal.

“This case is the oldest active criminal case on this Court’s docket. It appears that the defendant’s case is ripe for sentencing,” Crane wrote in April 2021, when he rescheduled the sentencing hearing for May. “The Covid-19 pandemic is not a ground for a continuance as the Court safely conducts sentencing hearings by Zoom or in person. The parties should be prepared to proceed with sentencing on this next hearing date. Any additional continuance requests will require a hearing and good cause shown.”

Crane, however, ended up rescheduling the sentencing for Tuesday — when it was delayed yet again.

“Omar is very remorseful and carries a great deal of regret for his actions,” said his attorney, Carlos A. Garcia of Mission. “He’s made peace with God and he looks forward to making peace with the government.”

Espericueta comes from a hardworking, religious family in the southwest part of Mission, Garcia said. He earned a doctorate in pharmacy from Texas Tech University and returned to the Rio Grande Valley, where he earned a reputation for helping the less fortunate.

“Half the courtroom was full of people there for him,” Garcia said. “And those people are just a fraction of the people that Omar has helped.”

Espericueta worked through the coronavirus pandemic, despite suffering from health conditions that made him particularly vulnerable to the virus, Garcia said. He eventually caught COVID-19 and required oxygen to survive.

“But for the choices that he made in 2015 and 2016, he would be a pillar of our community,” Garcia said. “But instead he has this unfortunate blemish on what is otherwise a model life that he has led.”