A federal judge on Tuesday sentenced a former guard at the East Hidalgo Detention Center to 18 months in prison for providing an inmate with cocaine.

“I’m very sorry for the problem that I got into,” Loya said. 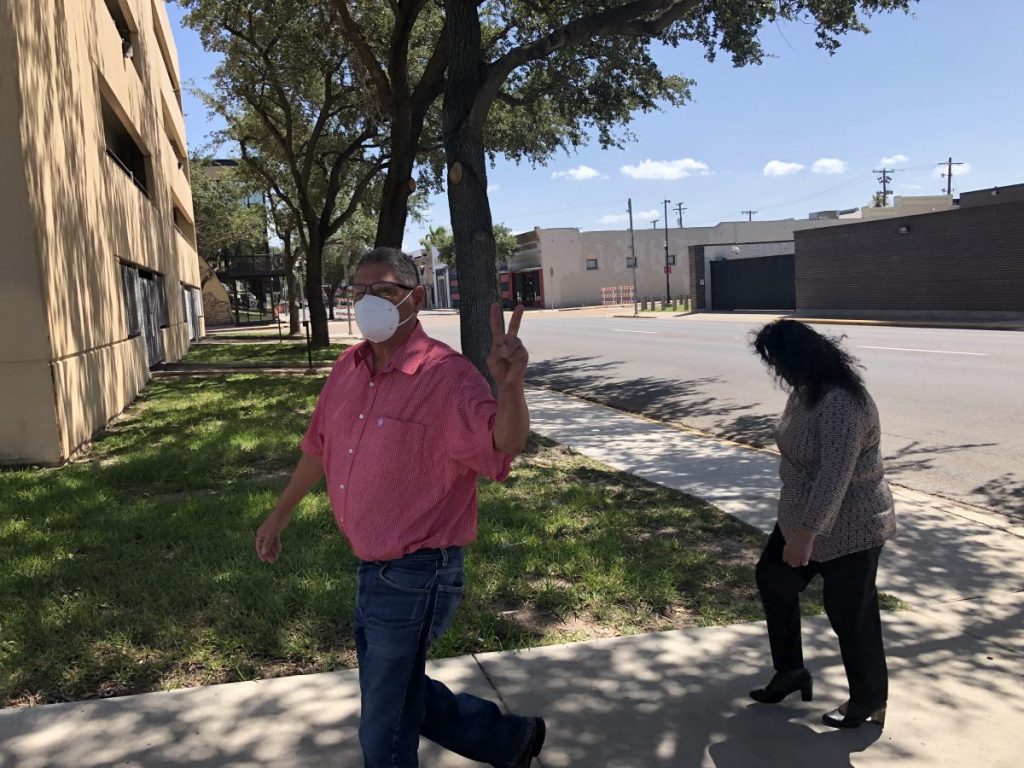 Erasmo Loya, 56, of La Villa left the federal courthouse in McAllen on Tuesday after a judge sentenced him to 18 months in prison. (Photo by Dave Hendricks / The Progress Times.)

The U.S. Drug Enforcement Administration arrested Torres Davila in November 2016 during an investigation that targeted Gulf Cartel “infrastructure and transportation cells,” according to a news release from the U.S. Attorney’s Office for the Southern District of Texas.

After his arrest, Torres Davila was taken to the East Hidalgo Detention Center. Loya started bringing him cocaine that month.

“He’s been cooperating with the government since the date of arrest in this case,” said Loya’s attorney, Sergio J. Sanchez of Edinburg.

Loya wasn’t the only person who provided inmates with contraband in exchange for cash.

After an investigation by the FBI, the U.S. Marshals Service and the U.S. Department of Justice Office of Inspector General, federal prosecutors secured indictments against seven detention center employees.

Three guards, a commissary officer and a medical assistant confessed to smuggling contraband into the detention center. They pleaded guilty to bribery.

During the bribery investigation, agents discovered a cook supervisor had a sexual relationship with an inmate. She pleaded guilty to sexual abuse of a ward.

A grand jury indicted Loya in November 2019. The bribery charge carried a maximum sentence of 15 years in federal prison.

Loya struck a deal with prosecutors.

They promised to dismiss the bribery charge. Loya agreed to plead guilty to providing contraband to a person in a correctional facility, which carried a maximum sentence of 10 years.

He returned to the federal courthouse Tuesday for sentencing.

After preparing a pre-sentence investigation report, the U.S. Probation Office calculated the guideline range at 12 to 18 months in prison. Sanchez, the attorney who represented Loya, requested probation instead.

Loya had no criminal history before his arrest, Sanchez said, and complied with all conditions of pre-trial release. While the case was pending, Loya found a full-time job at Rio Grande Regional Hospital in McAllen.

“And his job is going to be waiting for him,” Sanchez said, if Loya received probation.

Assistant U.S. Attorney Amy Lynn Greenbaum, who prosecuted the case, requested either a sentence within the guideline range or an upward departure.

When inmates asked Loya to bring them contraband, he initially refused, Greenbaum said. The inmates, though, kept asking.

Loya started by providing them with food, Greenbaum said. After that, he brought them marijuana.

“And then it was cocaine,” Greenbaum said.

The United States is a nation of laws, Alvarez said, and people involved in the criminal justice system — from judges to law enforcement officers to jail guards — must uphold the law.

“I’m of the firm opinion, Mr. Loya, that those people should set a better example,” Alvarez said, adding that Loya’s conduct troubled her.

Alvarez sentenced him to 18 months. Loya will be allowed to self-surrender.