After months of delays, the federal government may dismiss lawsuits against Rio Grande Valley landowners and return property seized for the border wall.

“Finally, I have some good news for you,” Smith said.

President Joe Biden paused construction on the border wall in January. The land condemnation lawsuits, however, remained in limbo for months.

During hearing after hearing, Smith said the U.S. Attorney’s Office was still waiting on instructions from Washington.

The White House released a plan in June, which detailed how the U.S. Department of Homeland Security would handle the lawsuits. 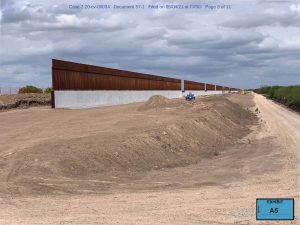 “If DHS determines use of the land will be necessary, particularly for life, safety, environmental, or other remediation work, it will initiate robust landowner engagement,” according to a statement released by the White House. “If DHS determines it no longer requires the use of such land, it will work to return the land to its prior owners.”

The U.S. Attorney’s Office plans to meet with officials from other parts of the government on Thursday morning, Smith said, and may receive approval to return land seized for the border wall.

Smith said he didn’t know the exact number of revestments the government was considering.

“Starting some time in the next few weeks, we should start to see revestment documents start to roll in to the court on particular cases,” Smith said.

Not all land condemnation lawsuits will be dropped.

“Border Patrol determines if they do need the land, be that for a road, a tower or maybe some maintenance or access,” said Assistant U.S. Attorney Hilda M. Garcia Concepcion.

During the meeting on Thursday, the U.S. Attorney’s Office and officials from other parts of the government will also discuss cases where the government wants to proceed with condemnation.

“So this should be far-reaching for a number of different cases, not just revestment cases,” Smith said.

After years of litigation, some property owners don’t want the land back.

“Some of the landowners have changed their mind. They were for revestment, we sent it up halfway, and now they don’t want revestment,” Smith said. “They want the money.”