This article first appeared in the November 19th issue of Progress Times.

The Palmhurst Municipal Court celebrated Municipal Court Month in honor of the contributions that the court makes to the safety and well-being of the city and residents.

According to the Texas Municipal Courts Education Center, Municipal Court Week is the opportunity to show appreciation to municipal judges, court clerks, court administrators, bailiffs, and warrant officers who make up the Texas municipal court system. 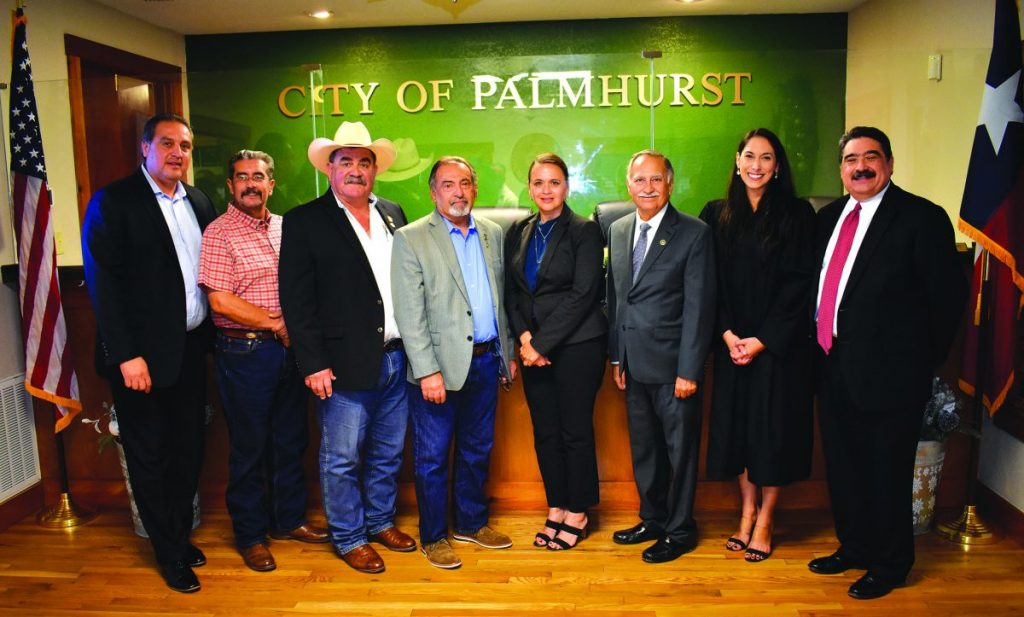 Photo courtesy of the City of Palmhurst.

Palmhurst wanted to acknowledge the court, and thank them for the important role that they play in the community. City manager Lori Lopez said she planned the event to celebrate Municipal Court Month and the fact that the court has been in existence for 15 years. “We were acknowledging them, thanking them and then welcoming someone to our team, to our court, which is an alternate judge. They [our municipal staff] work really hard, and wanted to make sure they were acknowledged for everything they do.”

Horacio Pena Jr. has been with the court for nearly 11 years and has been practicing law for 37 years now. Pena reminisced about his time with the court, “Frank Rodriguez, who is an attorney and friend of mine was the municipal court judge there when I got started as an alternate judge, and eventually, I was appointed by the city council to be the full-time presiding judge.”

The municipal court has come a long way from the days of handwritten notes to modern software and technology. Pena recalls “a mad rush to get organized, buy software and to make sure that every citation or complaint was tracked and entered into the computer.” 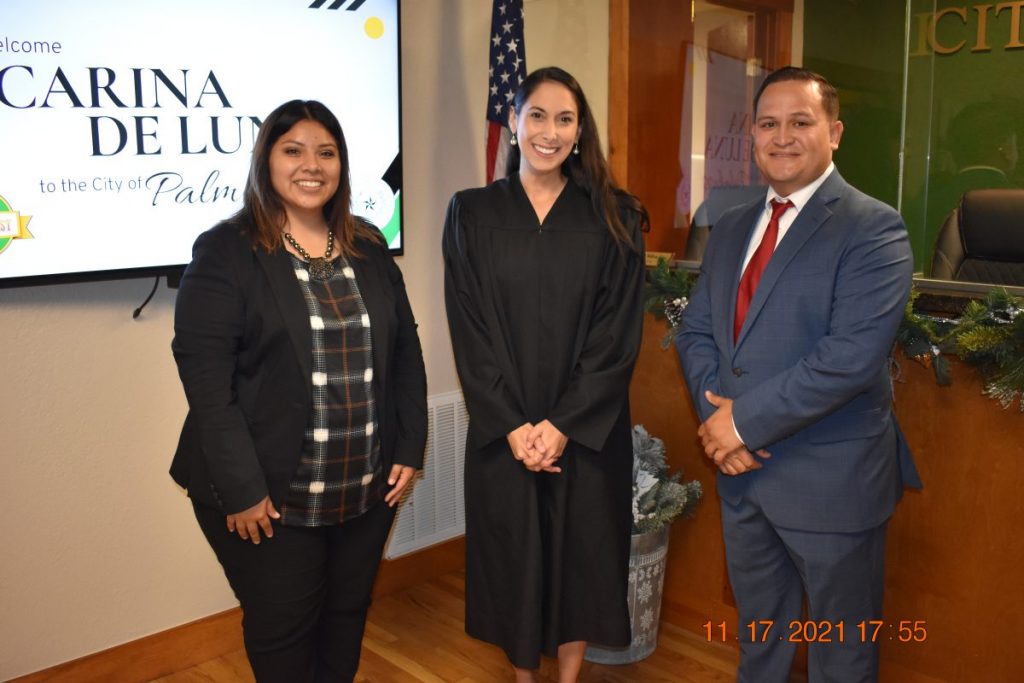 Photo courtesy of the city of Palmhurst.

The citizens have always been at the heart of decisions being made, “One of our biggest concerns was that individuals who paid their traffic citations, or any other citations, that we in fact had recorded them correctly and given proper credit,” recalls Pena.

As the city began to grow, they began using software provided by the state and hired a code enforcement officer to assist with sending notices and keeping up with city ordinances and state law.

Pena boasted about the city and staff, “The staff at the municipal court, the people that work together with me and help me are wonderful, the city council allowed me the tools and the ability to get organized. Richard, Annette, and Delia are the shoulder I lean on because they are really good. The police department is absolutely wonderful, and they work in conjunction with the municipal court to make sure we get all the records and reports that we need. I thank God they allowed me the opportunity to be a judge there, they [city council] allow you to work without interference. Lori Lopez [city manager] says ‘whatever you need to do that’s in compliance with the law, you do it’ and Darrel Davis the prosecutor, they’re class acts.”

Richard Garcia has been with the court for most of those years, first as the court clerk and now as court coordinator and city secretary. He has seen a growth in daily citations from 4-5 in 2010 to approximately 10-15 now and more on the weekends with the growth of the city. Garcia says that the municipal court goes above and beyond to help close out cases, by finding a way to help the defendants dispose of their cases with community service, not simply paying a fine.

He recalls starting at municipal court at about the same time Judge Pena was an alternate working on warrants. He currently oversees the court but credits Delia Diaz for the day-to-day duties and court running smoothly.
“I want to commend Delia Diaz our court clerk, who works with people who are upset and she talks to them and calms them down and works with helping them so they get their day in court. I credit Judge Pena and city prosecutor Darrel Davis for making themselves available to our court and who gives us the ability to be open to the public, be more personable and accommodating to people. They listen to the people and could be stricter but instead are compassionate. I’ve learned from them and continue to learn from them every day. 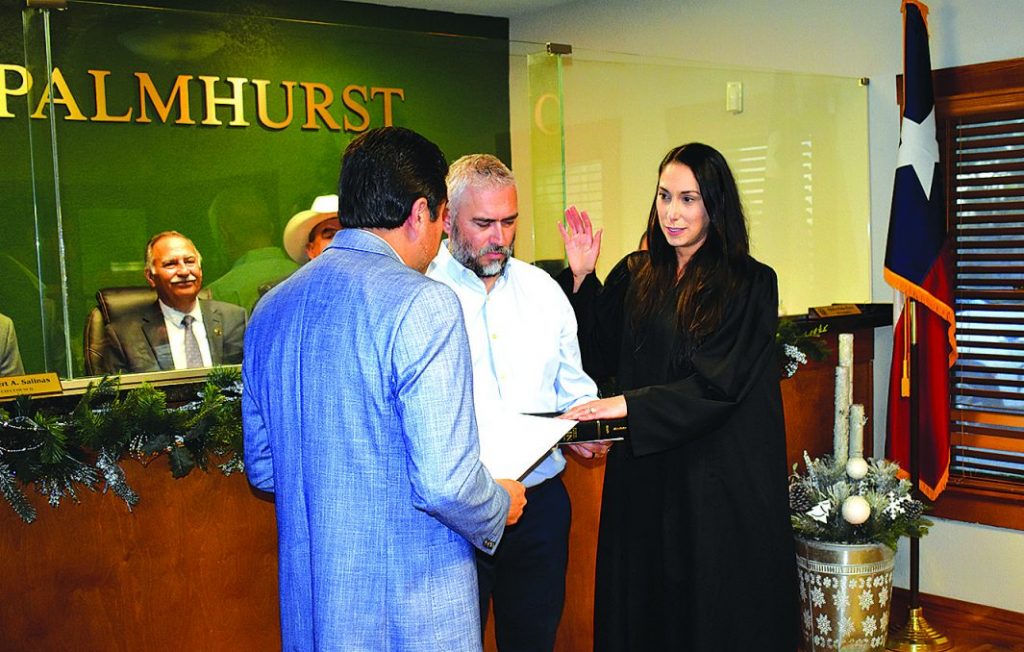 Photo courtesy of the city of Palmhurst.

Carina Garza De Luna was appointed as alternate municipal judge for the city of Palmhurst this week, making her the first female to serve Palmhurst in this capacity.
During a special called meeting held Wednesday, Nov. 17, De Luna was sworn in by District Attorney Ricardo Rodriguez surrounded by her family and friends. Palmhurst Mayor Ramiro J. Rodriguez Jr. spoke proudly about naming a female judge.

“She’s our first woman judge so whenever Judge Pena can’t be there, she’ll fill in for him. We are very proud of the fact that she is our first female judge,” Rodriguez said.
“Everyone unanimously decided to select her [De Luna]. The fact that she’s local and aware of everything going on around us, and she has been a practicing lawyer for at least 10 years, makes our jobs easier,” he added.

Pena couldn’t agree more, “she’s been practicing for about 13 years and has prior experience, she’s an intelligent lady with a lot of knowledge of the law and I know she will be an asset to the Palmhurst Municipal Court, they made a good choice in Carina, she is well qualified.”

De Luna currently serves as a municipal judge in San Juan and previously served in Sullivan City. When asked about being the first female municipal judge for the city she said, “I’m very excited that there is a female now on the court, it is a step in the right direction, and hopefully this will open doors for many more to come.”

She encourages young ladies to follow their dreams, work hard, and most importantly not be discouraged.