Peñitas Chief of Staff Andy Morales confessed Friday to accepting more than $1.1 million during a massive bribery and kickback scheme that involved more than a dozen politicians in western Hidalgo County. 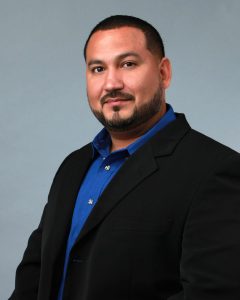 Andres “Andy” Morales. (Photo courtesy of the city of Peñitas.)

During the conspiracy, Morales received more than $1.1 million. He passed along nearly $374,000 to co-conspirators.

“Guilty,” Morales said, when asked how he pleaded.

Along with the politicians, the conspiracy involved a “high ranking administrator” at Agua SUD and a La Joya Independent School District employee.

The case against Morales is part of a wide-ranging FBI investigation that focuses on public corruption in western Hidalgo County.

The subpoenas requested information on Morales and his company, RGV Redlight LLC, which provided “fleet management” services to local governments.

Morales is the fourth person to plead guilty:

After the Agua Special Utility District purchased a water tank from his company, Romero paid about $6,000 to a member of the utility board, according to the factual basis for his plea agreement. Romero also paid at least $42,500 to a middleman, which he believed “would be partially used to deliver compensation or to influence Agua SUD board members for their respective votes.”

Many of them worked for La Joya ISD. Garza, who served on the school board, attempted to reward them with promotions and stipends.

Garza received at least $234,500 in bribes and kickbacks.

> On Jan. 12, 2022, businessman Jaime A. Rodriguez of Edinburg pleaded guilty to a bribery and money laundering charge.

Rodriguez paid $55,000 to a company owned by a high-ranking Agua SUD employee in exchange for a favorable recommendation, according to the factual basis for his plea.

All four pleaded guilty to a type of charging document called a criminal information, which is typically used when a defendant is cooperating with prosecutors.

Before he became a player in western Hidalgo County politics, Morales dabbled in drug smuggling.

In 2000, officers arrested Morales for attempting to mail about 21 pounds of marijuana from the FedEx building in Pharr.

“The packages were in FedEx Priority overnight delivery boxes, with a hand written label and fictitious addresses to the sender and recipient,” according to a report prepared by the Combined Governmental Drug Enforcement and Special Crimes Task Force, which investigated the case.

Morales pleaded guilty to possession of marijuana, a third-degree felony. As part of a plea agreement, prosecutors recommended deferred adjudication, which allowed Morales to avoid a felony conviction.

Agents with the U.S. Drug Enforcement Administration linked Morales to a marijuana bust, according to Mission Police Department records.

He pleaded guilty to possession of marijuana, a second-degree felony. The case left Morales with a felony conviction, but he managed to avoid prison.

Morales had more problems with the law in May 2021, when the U.S. Bureau of Alcohol, Tobacco, Firearms and Explosives arrested him on gun charges.

Morales had purchased guns at Glick Twins in Pharr and Bass Pro Shops in Harlingen.

When he made the purchases, Morales filled out a standard form that asked: “Have you ever been convicted in any court of a felony, or any other crime for which the judge could have imprisoned you for more than one year, even if you received a shorter sentence including probation?”

Morales answered “No,” according to the criminal complaint against him, even though he’d been convicted in 2005.

A federal grand jury indicted Morales on one count of being a felon in possession of a firearm and three counts of making a false statement during the purchase of a firearm.

After he was arrested, the ATF searched Morales’ house in Mission.

Agents found “a large amount of cash,” according to Assistant U.S. Attorney Roberto “Bobby” Lopez Jr., who discussed the search during a hearing in May 2021.

He returned to court Friday after striking a plea agreement with federal prosecutors.

Morales pleaded guilty to conspiracy to defraud the United States and one count of making a false statement during the purchase of a firearm. As part of the plea agreement, Morales agreed to forfeit nearly $740,000.

In exchange, prosecutors agreed to recommend dismissal of the remaining charges in the indictment at sentencing.