Peñitas City Councilman Alex Guajardo confessed Friday to participating in a conspiracy to bribe members of the La Joya school board.

“Alex is a stand-up guy,” said attorney Carlos A. Garcia of Mission, who represents Guajardo. “He looks forward to making amends for the mistakes of his past and he shouldn’t be judged on a brief part of his life, but rather on the totality of his life.”

Guajardo received at least $275,000 from co-conspirators in 2020, said Assistant U.S. Attorney Roberto “Bobby” Lopez Jr., who is prosecuting the case. After he received the money, Guajardo distributed cash and checks to members of the La Joya school board.

The kickbacks apparently rewarded members of the school board who approved a contract with Performance Services Inc., an Indiana-based company that specializes in “energy savings” projects. 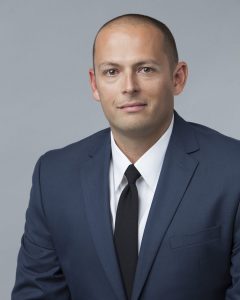 Alex “Payo” Guajardo. (Photo courtesy of the city of Peñitas.)

Along with members of the school board, Guajardo bribed a La Joya ISD administrator to support the contract with Performance Services Inc., which is identified in court records as “Company A.”

Neither the La Joya ISD administrator nor the public official were identified by name.

The case against Guajardo is part of a wide-ranging FBI investigation that focuses on public corruption in western Hidalgo County.

Subpoenas issued during the investigation sought information on Guajardo and Payoplex LLC, a company he created in March 2018.

When he appeared in court on Friday afternoon, Guajardo became the fifth person to plead guilty.

They all waived indictment and pleaded guilty to a type of charging document called a criminal information, which is typically used when a defendant is cooperating with prosecutors.

The cases against them implicate more than a dozen politicians in western Hidalgo County, along with other public officials.

Guajardo graduated from La Joya High School and played baseball at the University of Texas-Pan American, where he earned a master’s degree in education.

La Joya ISD hired Guajardo in 2008, when he became a teacher, according to documents released under the Texas Public Information Act.

After teaching for less than 10 years, Guajardo became an administrator. Guajardo held several positions, including athletic director and executive director for administration.

Behind the scenes, however, Guajardo became a middleman for corrupt members of the school board.

“As part of the scheme, co-conspirators serving as trustees for the school district would receive bribes or kickbacks in the form of direct payment and/or through subcontractors they personally selected and/or would recommend to perform portions of the subcontract,” Lopez said.

The payments went through several people or corporations, Lopez said, to keep the kickbacks secret.

As part of his plea, Guajardo confessed to causing someone to send an email that contained a bogus invoice.

“The invoice was requested to disguise a bribe payment routed through defendant’s bank account to a company associated to a co-conspirator who was serving as a La Joya ISD trustee,” Lopez said.

Guajardo struck a deal with prosecutors and appeared in court by videoconference Friday to plead guilty.

The charge against Guajardo — that he violated the federal Travel Act by sending an email as part of a conspiracy to commit bribery and money laundering — is punishable by a maximum of five years in federal prison.