The McAllen City Commission caught a glimpse Thursday of how population growth in North McAllen will drive the redistricting process.

Attorney C. Robert Heath of Austin walked the City Commission through the numbers on Thursday morning.

“We’re going to have to move a lot of population from the north down to the south,” Heath said. 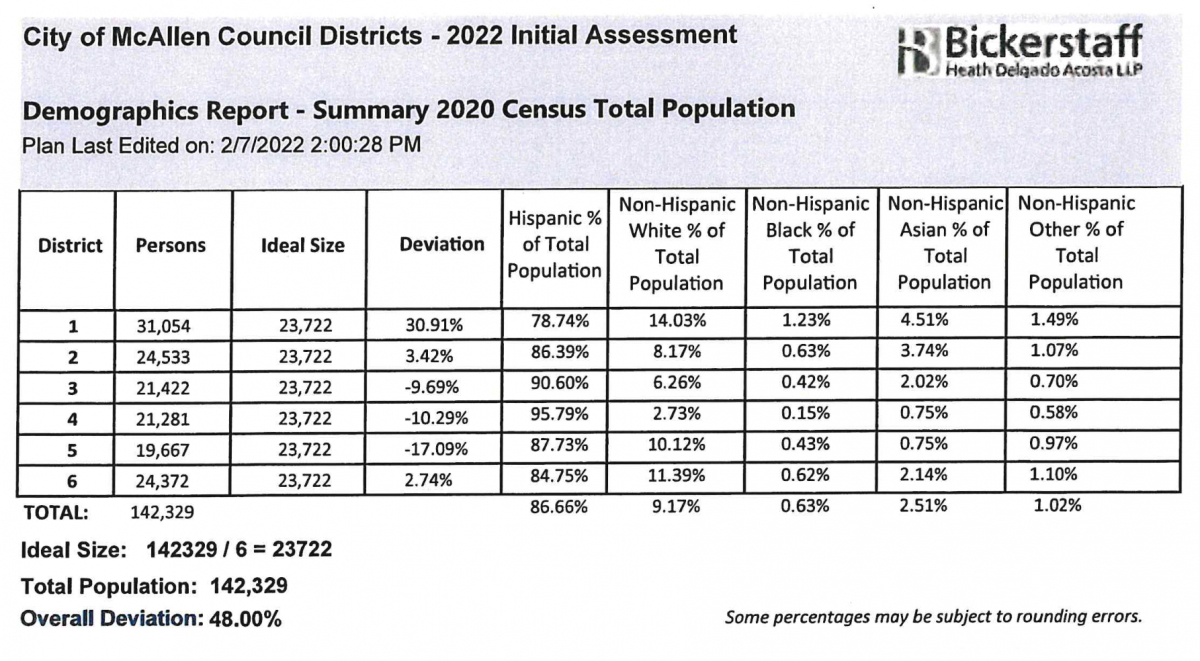 Heath presented the City Commission with a sample map that showed how McAllen could accomplish that with minimal changes to other districts.

The sample map shifted the northernmost part of McAllen from District 1 to District 2 and extended District 5 much further north.

“But, ultimately, my thought is: Those are just starting points. Because nobody elected me. They elected you,” Heath said. “And you’re the ones that know the community. And you decide the policy, and you decide what works for McAllen.” 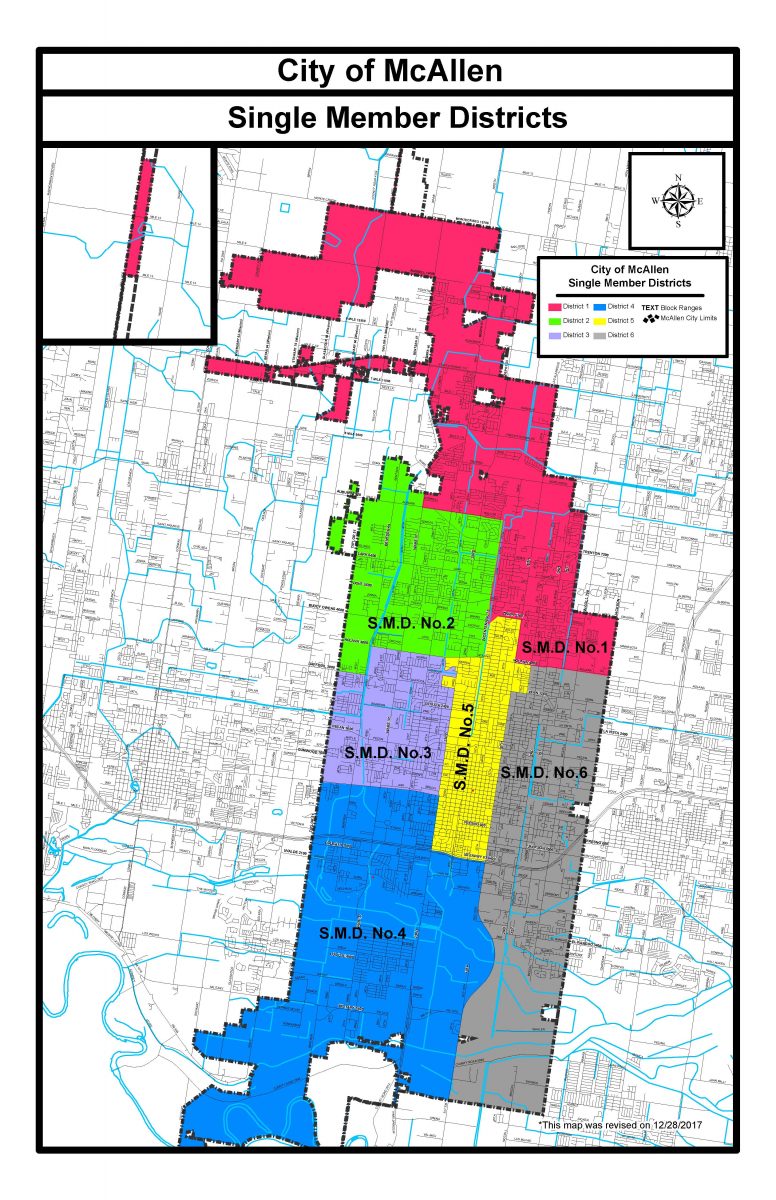 The existing McAllen City Commission districts. (Map courtesy of the city of McAllen.)

McAllen hired Heath — an attorney at Bickerstaff Heath Delgado Acosta, a law firm with offices in Austin, Houston, El Paso and McAllen — to assist the city with redistricting.

McAllen adjusts the commission districts after every census to keep the populations as close to equal as possible. Population, though, isn’t the only consideration.

“We suggest that you say: We’re going to follow identifiable boundaries,” Heath said. “We want the districts to be something that people can recognize.”

To comply with federal law and court rulings, Heath said McAllen should do everything possible to avoid splitting up neighborhoods and voting precincts.

Race and ethnicity, which are usually the biggest potential issues during redistricting, shouldn’t be a problem, Heath said. 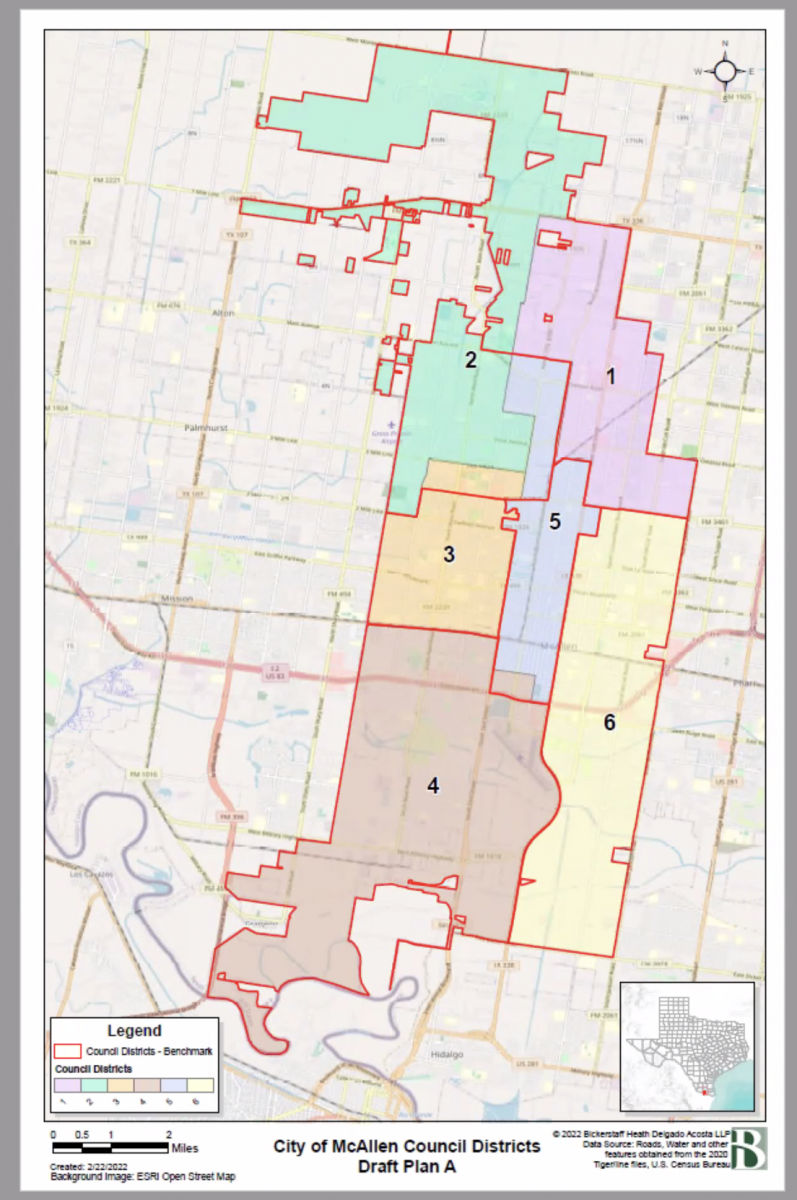 McAllen is more than 80% Hispanic, according to data published by the U.S. Census Bureau, and every City Commission district is majority Hispanic.

“I don’t think that’s going to be an issue in McAllen because every district in the current plan and in any plan we draw will have a very substantial Hispanic population,” Heath said. “I don’t think any district would be one where Hispanics would not have at least an equal opportunity to participate in the process and elect, which is what the statutory standard is.”

Heath recommended the City Commission adopt criteria for the redistricting process and review a couple sample maps before attempting to draw new districts.

“It’s hard for us because we’re a long and narrow city,” said City Commissioner Tony Aguirre, who represents District 1, which must cede about 7,000 residents to neighboring districts. “So our citizens need to realize that it’s not a perfect square or rectangle that we can cut it up equally on every boulevard. It’s a challenge.”

McAllen plans to complete the redistricting process before City Commission candidates start filing ballot applications for the May 2023 election.