Two consultants with political connections abruptly resigned from the city of Palmview during the past two months.

Juliana Q. Garza — the wife of former La Joya school board Trustee Armin Garza — quit her $2,500 per month consulting job in January, when her husband pleaded guilty to conspiracy to defraud the United States. La Joya school board Trustee Oscar “Coach” Salinas did the same on Tuesday, when he walked away from a $1,500 per month contract for public relations.

“We’re looking at all our consultants,” said Mayor Rick Villarreal, who added that Palmview could save money by assigning some tasks to employees.

Palmview started paying them last year, according to documents released under the Texas Public Information Act.

Villarreal signed a contract with HFKT Consulting LLC, a company owned by Juliana Garza, in February 2021. 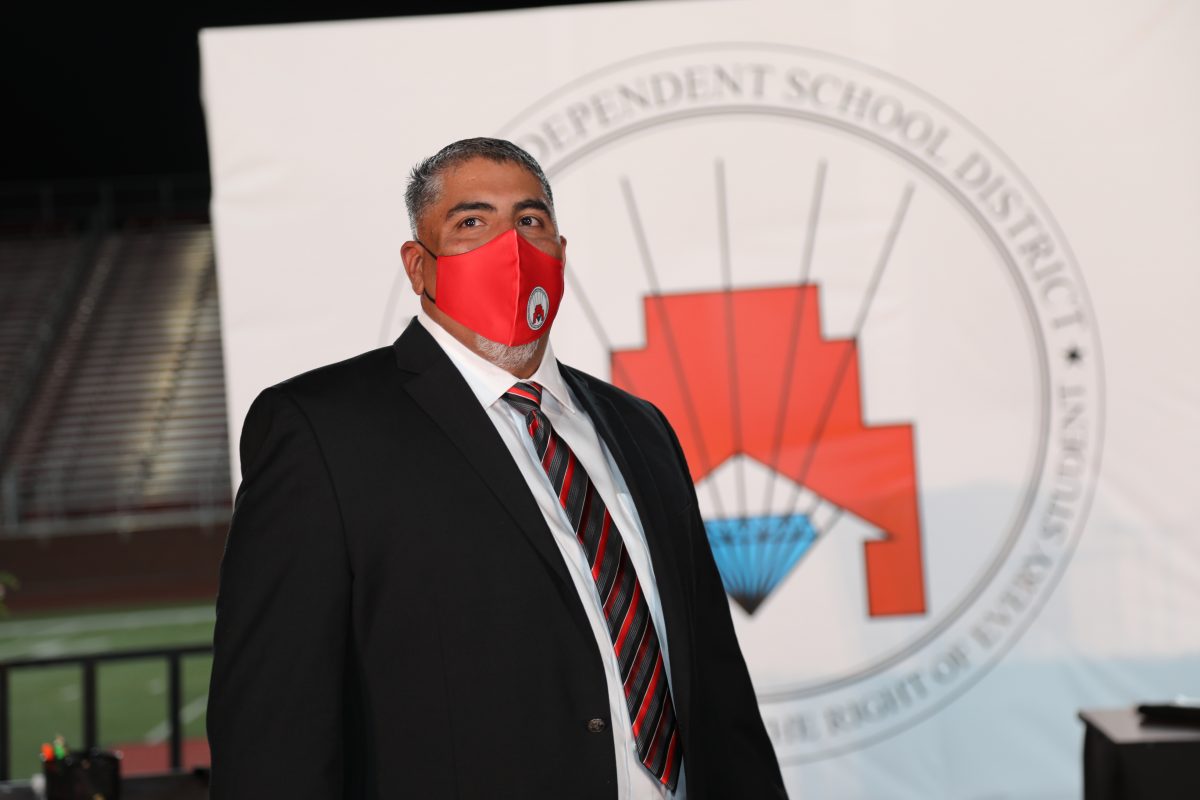 La Joya school board Trustee Armin Garza on Nov. 13, 2020, when he was sworn in for a second term. (Photo courtesy of La Joya ISD.)

HFKT Consulting agreed to provide Palmview with “professional services” on everything from personnel management to municipal policy, according to the contract. In exchange, Palmview agreed to pay $2,500 per month.

The contract is stamped “approved by Palmview City Council” on Feb. 2, 2021. Minutes for the meeting don’t mention Juliana Garza, Armin Garza or HFKT Consulting by name.

After meeting in executive session about professional service agreements, the City Council unanimously voted to “proceed as discussed.”

Several members of the City Council, however, said they believed Palmview would contract with Armin Garza.

“As far as his wife being involved, I had no idea whatsoever,” said City Councilman Javier Ramirez.

City Councilman Joel Garcia also said he was under the impression Palmview had signed a contract with Armin Garza, not his wife.

Armin Garza had worked for the Agua Special Utility District, the city of Peñitas and Hidalgo County Precinct 3. Ramirez said the City Council thought he could assist Palmview with infrastructure projects, trash collection services and other initiatives.

“We just went with Armin because I felt he was the right person for the job,” Ramirez said. “And I feel he did a good job — what he did for us.”

Invoices and other documents released under the Public Information Act show HFKT Consulting worked on a proposal to create a stormwater fee, a hazard mitigation plan and other projects.

Emails from the company were signed either “HFKT Consulting” or “Juliana Q. Garza.”

Juliana Garza quit on Jan. 10, 2022, after her husband pleaded guilty to conspiracy to defraud the United States, a federal charge punishable by five years in prison. As part of his plea, Armin Garza confessed to accepting $234,500 in bribes.

“This letter is to inform you that as per request HFKT is formally resigning as of 1/10/22,” according to an email from HFKT Consulting to Palmview City Manager Michael Leo. “We hope that the 2 past due payments will be sent.”

“It’s just unfortunate that we would be caught up in this mess,” Ramirez said. “We’re honest people in Palmview. We try to do the right thing.” 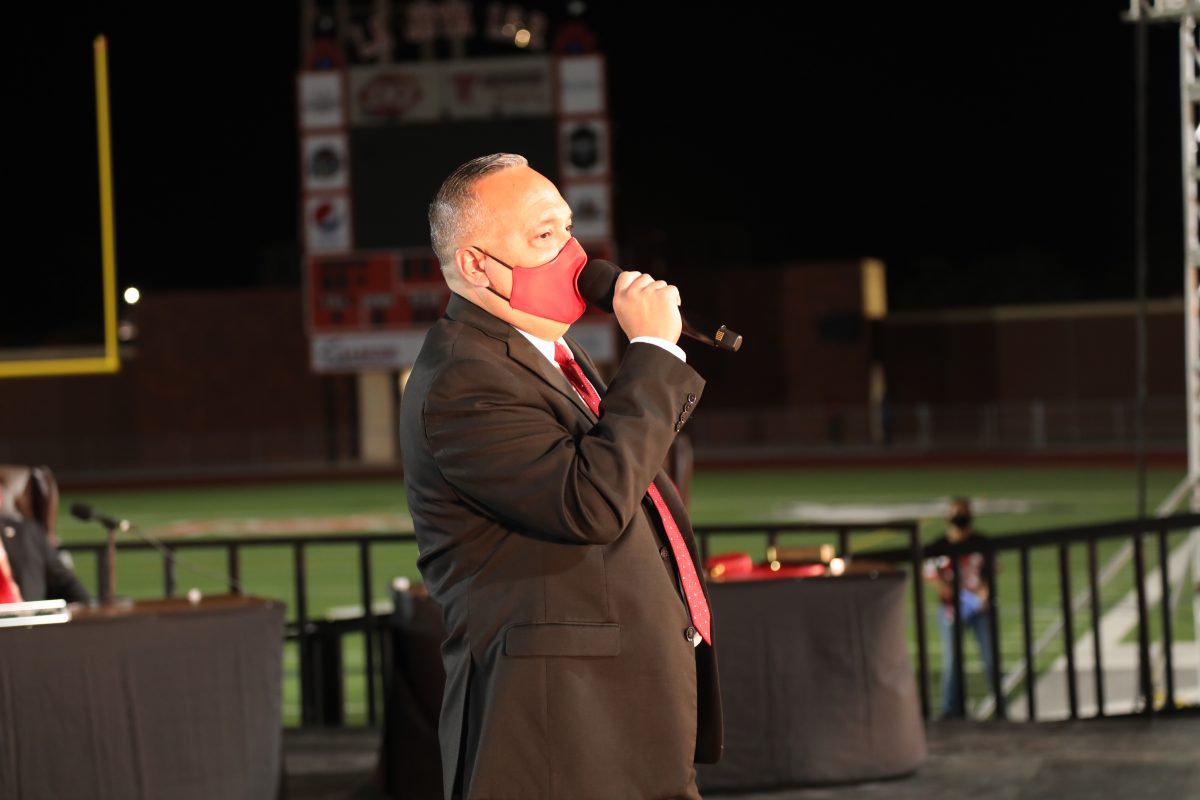 Oscar Salinas agreed to handle “community outreach services” for Palmview, according to the contract. In exchange, Palmview agreed to pay him $1,500 per month.

The contract is stamped “approved by Palmview City Council” on Nov. 8, 2021.

Members of the City Council met privately about “community outreach services” and unanimously voted to proceed “as discussed in executive session.” They didn’t mention Oscar Salinas by name.

“Honestly, public relations is vital for the city,” Villarreal said.

“After March, we were going to terminate his services,” Villarreal said. “It wasn’t like a long term thing.”

The City Council, though, re-examined the relationship with Oscar Salinas and two other public relations consultants in February. Villarreal said they concluded Palmview could save money by hiring a full-time employee to handle public relations instead.

To avoid the embarrassment of being fired, the City Council allowed Oscar Salinas to resign. He submitted a resignation letter on Tuesday.

“I would like to thank Mayor Villareal (sic) and the entire Council members for the opportunity to have served as a consultant for the City of Palmview. Even though it was a short length of time,” Salinas wrote. “I got to enjoy and help the city provide assistance to its residents thru Thanksgiving, Christmas and as we entered the New year with the goal to serve our people and fight together this awful Pandemic known as Cov-19 (sic).”

Both contracts raised uncomfortable questions about potential conflicts of interest.

Five of the six people who serve on the City Council work for the La Joya Independent School District.

The only member of the City Council who doesn’t work for the school district is Joel Garcia. In August 2021, he became an alternate municipal judge in Sullivan City, where Oscar Salinas’ wife, Alma, is the mayor.

“Maybe the perception is there, but I got appointed by the mayor,” Garcia said. “And when she talked to me, she made it very clear that it was because of her knowing I could represent the city well.”

The perception that Juliana Garza and Oscar Salinas were hired for political reasons was reinforced by the way Palmview selected them.

“The perception is not good,” Ramirez said.

In the future, Ramirez said he thinks Palmview should issue a request for proposals to avoid the potential appearance of impropriety.

Former City Councilwoman Linda Sarabia, who is running for mayor, said the situation concerned her.

People employed by the school district shouldn’t be hiring school board trustees, Sarabia said, because of the inherent conflict of interest.

“Whether they’re pressured directly or indirectly, they just feel that pressure to make those decisions — that we’ve seen are not in the best interests of our constituents,” Sarabia said.