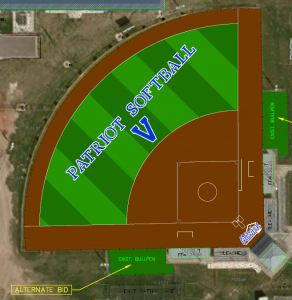 At the April board of trustees meeting, the school board finalized a contract with Hellas Construction for the baseball and softball field turf projects. The board approved the contract for $3,852,000 for synthetic turf on all four fields and their bullpens.

Hellas Construction is based in Cedar Park, Texas, and they also completed the turf for Tom Landry Hall of Fame Stadium in 2014. Director of Public Relations and Marketing Craig Verley said the district had no issues with the football field turf during or after installation, contrary to rumors that the field doesn’t have a proper drainage system.

The board approved the contract in a 6-1 vote, with trustee Iris Iglesias as the dissenting vote. At the special meeting, Iglesias said she preferred Field Turf because they have a good reputation, but she later expressed she took issue with the procurement process more than anything.

“We have a ranking system and I felt that together, with that, we should have had a presentation by both companies to see what they were going to bring to the table or what they were going to offer to the district. And if not, to the board, at least to our coaches, our athletic director, the coordinators,” the trustee said. “There are existing fields in the Valley from both companies I felt they should have gone to visit and then even talked to their staff, just to do a little homework and background check and not just determine on a ranking sheet.”

During two separate April meetings discussing the project, Iglesias questioned why administration recommended the board approve Hellas when second-ranked contractor Field Turf submitted a proposal with a lower price. Ultimately it came down to the point system administration uses to rank third-party contractors. Hellas earned more points and was, therefore, ranked higher.

Although Hellas Construction had a bid with a higher total, they had the lower proposal for three of the four fields. Field Turf’s total to include the bullpens came in at $3,737,120.

According to Verley, the procurement process is as follows: the purchasing department reviews submitted proposals and administration pre-ranks to assure they meet the criteria. Criteria are based on expertise, competence and qualifications. Administration presents only a recommendation based on these criteria.

However, this method was not always the practice. Previously, the board of trustees used to do the ranking instead of administration, which was the practice when the board approved the contractor for the football stadium renovations during the 2016-2017 school year. But around May 2019, the trustees approved the new procurement process currently used. Still, Verley said the board always has the option and authority to conduct its own evaluation and ranking.

Substantial completion for the project is 120 days starting May 5, which could be delayed depending on if the teams advance to the playoffs.

The coaches from each school selected specialized designs for the new fields to include logos in center field and text along the foul lines for Mission High School.

Verley said Mission CISD decided to switch the baseball and softball fields to synthetic turf because it is a smoother surface for the athletes and allows for better drainage control and general upkeep.

This article has been updated to include information from an interview with Iris Iglesias after it originally published.