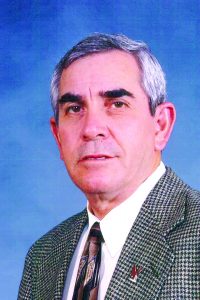 SAN BENITO – Rosendo “Roy” C. Garcia, 80, passed away on Monday, June 20, 2022, at his home in San Benito.
Born in Olmito, on Feb. 27, 1942, he grew up in a family of migrant workers and lived in Los Fresnos during his childhood. As a three-sport star athlete at Los Fresnos High School, he earned a scholarship to Texas Southmost College. After serving a tour in Germany with the U.S. Army, he married Angie Farias in 1968. He then earned his bachelor’s and master’s degrees in science from East Texas State and began a coaching career at Los Fresnos in 1971 as a head baseball coach. In 1972 he was hired to coach the football offensive line and basketball at Mission High School. He was named the Mission athletic director in 1978 and remained as head basketball coach. While at Mission, Coach Garcia garnered 11 district championships and 15 playoff appearances in 28 seasons. He retired from Mission in 2001.

After his wife Angie passed away in in 2003, he took over the basketball program at San Benito High School where he led the Greyhounds team to the playoffs three years in a row. While in San Benito, he met and married Dahlia Perez in 2006.
Coach Garcia then went on to become head basketball coach at the new Southwest High School in Pharr, and retired again in 2015, but came back to the game at Sharyland High School as assistant to his son-in-law, David Keith, and concluded his coaching career with a final year at Nikki Rowe High School in McAllen under Coach Jose Yebra. He retired for the last time in 2018.

He was preceded in death by his first wife and mother of his children, Angelita Garcia; parents, Angelita Coronado Garcia and Guadalupe Garcia; brother, Luis Rodriguez; mother-in-law, Julia Perez; and brother-in-law, Reynaldo Perez.
A funeral mass was held on Monday, June 27, at Our Lady of Guadalupe Catholic Church with Rev. Roy Snipes, O.M.I., officiating. Burial followed at Valley Memorial Gardens Cemetery in Mission.