The Mission Police Department suspended eight officers in March after investigating a high-speed chase that injured an innocent bystander.

Officers failed to follow department policy in September, when they chased a Dodge Durango from Mission to San Juan at speeds of up to 125 mph, according to documents released under the Texas Public Information Act.

During the pursuit, the Durango struck a BMW driven by 19-year-old Enrique Rodriguez of San Juan. He suffered a traumatic brain injury and spent more than a month in the hospital. 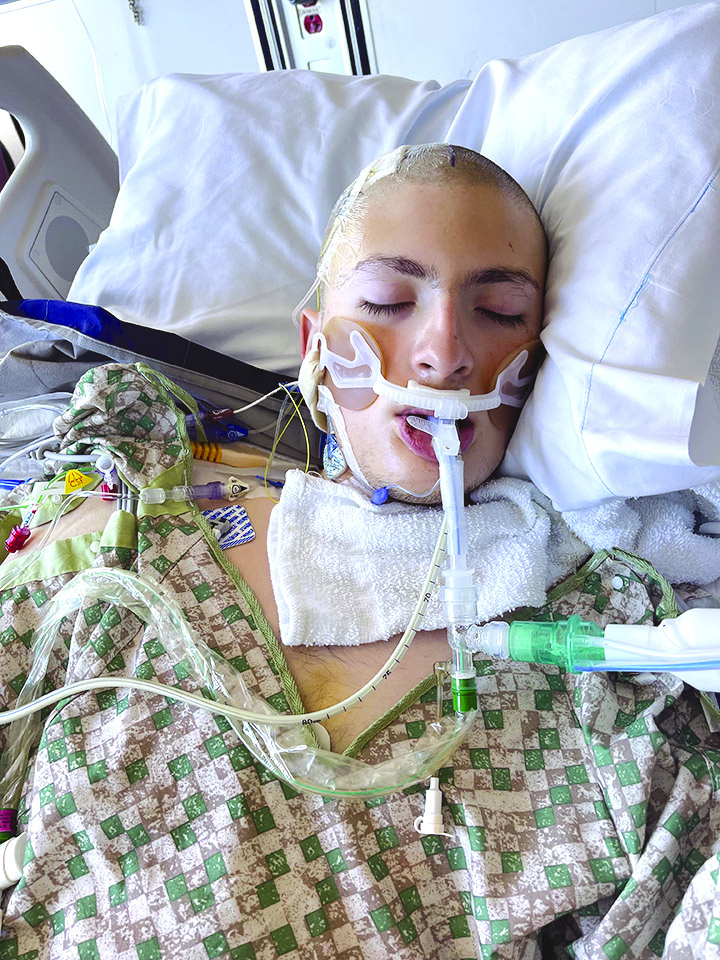 Enrique Rodriguez on Sept. 23, 2021, two days after a vehicle being chased by Mission Police Department officers struck his car. He suffered a traumatic brain injury and spent more than a month in the hospital. (Photo courtesy of Citlalli Rodriguez.)

“At this point, what could I tell you that would reverse what happened to my son?” said his mother, Citlalli Rodriguez. “Do I think there’s any fair punishment for lack of common sense and absolute disregard for the community?”

A suspension is just a slap on the hand, Citlalli Rodriguez said, adding that officers who placed the public in danger should be fired.

“I will say this. They were very attentive. They were on top of letting us know how the investigation was going when it came to the actual crime that didn’t involve them,” Citlalli Rodriguez said. “But you don’t expect anything less from the people that are supposed to protect and serve you.”

The high-speed chase started with a traffic stop.

At 4:49 a.m. on Sept. 21, a black Dodge Durango passed Officer Samuel Monjaras on 1 Mile South Road, according to Mission Municipal Court records. Monjaras attempted to stop the Durango, but the driver sped away.

Along with other police officers, Monjaras chased the Durango through Mission, McAllen and Pharr. Officers reached speeds of up to 125 mph during the chase.

Mission only allows officers to initiate a pursuit if “the need to immediately apprehend the suspect outweighs any substantial risk of harm to the public,” according to the policy.

It’s not clear what risk the Durango posed or why officers believed the lack of a license plate light justified a high-speed chase.

According to documents from the internal investigation, Monjaras suspected the Durango could be linked to drugs or human smuggling. The policy, however, explicitly prohibits officers from initiating a pursuit to make a human smuggling arrest.

“Vehicle Pursuits will not be initiated on vehicles known to be involved in human smuggling,” according to the policy. “Once a vehicle pursuit has been initiated and the pursuing officer(s) obtains information that the vehicle being pursued contains victims of human smuggling, the pursuit will be discontinued immediately.”

When they reached San Juan, the Durango struck a silver BMW near the intersection of Business 83 and Nebraska Avenue.

The impact knocked Enrique Rodriguez, the driver of the BMW, unconscious. He suffered a traumatic brain injury and spent more than a month in the hospital.

With support from his family, Enrique Rodriguez recovered. The crash, though, affected his short-term memory, his ability to multi-task and his decision-making skills.

Samuel Martinez, the driver of the Durango, pleaded guilty to accident involving serious bodily injury, aggravated assault with a deadly weapon and evading arrest or detention with a vehicle.

State District Judge Mario E. Ramirez Jr. sentenced Martinez to 10 years in prison and ordered him to pay $386,000 in restitution.

After reviewing the results of an internal investigation, Mission suspended a lieutenant, a sergeant, a corporal and five officers.The Progress Times requested the documents on March 21. Mission, concerned about litigation, requested a decision from the Texas Attorney General’s Office, which delayed the request for months.

The documents, which Mission released in June, revealed officers had received punishments that ranged from 7 to 17 days without pay:

“You failed to order discontinuation of the pursuit, and permitted officers under your supervision to continue the pursuit, ignoring these increasing hazards — the extreme high speeds, the presence of other uninvolved vehicles, the deteriorating condition of the Durango, and the construction zone,” according to her suspension memo.

“You continued the pursuit at a high rate of speed — according to your statement to investigators, up to 125 miles per hour — through the cities of Mission, McAllen, Pharr, and San Juan, including through construction zones, leaving the boundaries of your sector,” according to his suspension memo.

“You had no information from the initiating officer as to what offense had been committed by the Durango driver or what offense the initiating officer suspected that would have justified pursuit,” according to her suspension memo. “At no point during the incident or afterwards during the investigation did you possess a reasonable belief that the need to immediately apprehend the suspect outweighed the substantial risk of harm to the public, or a reasonable belief that the escape of the fleeing suspect represented a serious threat to public safety justifying continued pursuit despite increasing hazards.”

“You stated to investigators that you knew only that Officer Monjaras had initiated a traffic stop, but had no knowledge of the reason Officer Monjaras initiated the stop, or what the driver of the Durango was suspected of,” according to his suspension memo. “You did not request any information over the radio as to the reason for the pursuit.”

“In your Command Review of the Pursuit Summary Report prepared by Corporal Leal, you failed to note or correct the deficiencies in the report,” according to his suspension memo. “The report failed to include minimum elements required by the pursuit policy, omitting personnel involved and omitting the significant events of the violations of the Department’s pursuit policy occurring during the pursuit — including that the report failed to identify the basis for the initial stop, that an excess number of officers engaged in the pursuit, that officers passed other officers during the pursuit, that secondary units left their sector without authorization, and that police officers arriving at the scene of the collision failed to render aid to the victim.”

The suspension memo also faulted Ramirez for what happened after the crash.

“At the scene of the collision, you failed to provide any supervision of the scene and instead, left your shift early,” according to his suspension memo.

“You stated to investigators that you did not pay attention to your speed during the pursuit,” according to his suspension memo. “In San Juan, the Durango collided with another vehicle — a BMW — not previously involved in any way in the pursuit, causing severe injuries to the driver.”

“When asked by Corporal Alexandria Leal immediately after the collision why you and other officers were chasing the Durango, you responded, ‘I don’t know,’ or words to that effect,” according to his suspension memo. “You stated that you did not know or did not remember pursuing the Durango at speeds of up to 125 miles per hour.”

“You cited your training and experience in explaining to investigators that the driver of the Durango appeared to be involved in illegal activity, and your knowledge that the area in which you first observed the Durango is known for narcotic and human smuggling activity. Yet you had no information that the Durango was involved in either narcotic activity or human smuggling,” according to his suspension memo. “You further stated that you suspected that another vehicle — a Chevrolet Impala — was working in concert with the Durango to interfere with your stop, but also acknowledged that the age and condition of the two vehicles and the interference maneuvers you suspected were not consistent with these criminal offenses. None of your reasons provided support for a reasonable belief that the suspect’s escape represented a serious threat to public safety.”

Civil Service Director Jesse Lerma said none of the officers appealed the suspensions.