A judge sent a sex offender back to prison Monday after he pleaded guilty to possession of child pornography.

“I am sorry for what I’ve done,” Wells said. “Not only this case but the priors.”

In September 2007, when Wells lived in Lockhart, a small town between Austin and San Antonio, he was accused of exposing himself to a 3-year-old girl, according to court records. Officers who investigated the incident discovered Wells also had child pornography. 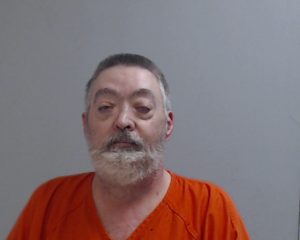 In August 2008, a judge sentenced Wells to 16 years in prison, according to documents released by the Caldwell County District Clerk’s Office. The Texas Department of Criminal Justice, however, released Wells on parole in August 2019.

Wells moved to Edinburg, where he stayed in a halfway house on West Chapin Street.

While in prison, Wells said he became “well-versed” in the Bible.

Religion helped keep him away from child pornography, Wells said, and he met with members of a church that visited the halfway house. Wells said the church stopped visiting when the pandemic started.

“I slowly allowed myself to fall away from God and not stay focused on that. So I wound up going back to my old life,” Wells said. “And that’s something I regret very much.”

Wells wasn’t allowed to use computers or access the internet. He scraped together some money and purchased a Samsung Galaxy smartphone anyway.

“I paid for that through my disability,” Wells said. “Because I did not have a whole lot of expenses staying at the halfway house.”

After buying the phone, Wells installed software that allowed him to access the so-called “dark net,” where pedophiles share child pornography.

“Wells downloaded 371 videos of child pornography which included images of the sexual assault and rape of pre-pubescent children,” according to a news release from the U.S. Attorney’s Office for the Southern District of Texas.

Officers employed by the halfway house found the phone in May 2021.

Wells “admitted he had child pornography on his cellphone and admitted the SD cards found in his possession contained more photos of naked children and some of them were involved in sexual intercourse,” according to the criminal complaint against him.

A federal grand jury indicted Wells in July 2021. The charge against him, receipt of child pornography, is punishable by 15 to 40 years in federal prison.

He returned to court on Monday wearing black pants, a gray polo shirt and a blue surgical mask, which covered his scraggly beard.

“He takes about eight or nine different medications,” Guerrero said.

Guerrero asked the judge to consider a 15-year prison sentence.

“I’m sorry you got involved in this again,” Crane said, adding that Wells is clearly a pedophile.

After he’s released from prison, Wells will spend the rest of his life on supervised release.

Crane also ordered Wells to pay $15,000 in restitution. The money will be split between five victims identified by investigators.