This article has been updated to reflect the most recent number of cases.

It’s been just over a month since the Hidalgo County health officials reported the first monkeypox case in the area. Since then, that number has increased to seven, according to the Hidalgo County Health and Human Services Department.

Each Monday, Hidalgo County reports the number of cases in the country, state and county on social media. According to a CDC data map, as of Sept. 27, there are 25,341 confirmed monkeypox cases. Texas has 2,292 positive cases. Only California, New York and Florida have more confirmed cases in the U.S.

The same day Hidalgo County officials released the news of three additional cases, the Los Angeles Department of Public Health and the Center for Disease Control confirmed the first monkeypox death in the U.S. The deceased was a resident of Los Angeles County in California.

But before the confirmed death in California, Texas reported an investigation into the death of a person in Harris County that could be linked to monkeypox. However, officials from Harris Health System have not released any new information, and they were unavailable to provide an update on the matter. 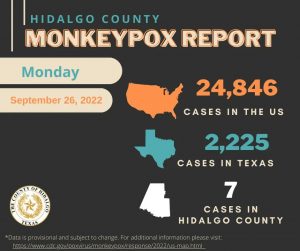 The individuals in Los Angeles County and Harris County were described as “severely immunocompromised,” but neither report specified any other patient details. According to the Texas Department of State Health Services, monkeypox is a painful but not life-threatening illness that results in a rash that can look like blisters or pimples.

“Monkeypox is a serious disease, particularly for those with weakened immune systems,” DSHS Commissioner Dr. John Hellerstedt said in a media release. “We continue to urge people to seek treatment if they have been exposed to monkeypox or have symptoms consistent with the disease.”

According to the Texas health department, those that experience initial symptoms — fever, chills, swollen lymph nodes and a recent unexplained rash — should contact a healthcare provider. Once diagnosed, people should stay home and avoid close contact with others until scabs from the sores fall off and a new layer of skin forms. The lifespan of the disease can last between two and four weeks, and symptoms usually start within three weeks of exposure to the virus.

Monkeypox can spread to anyone. The spread can occur mostly through skin-to-skin contact, bodily fluid contact and respiratory droplet contact. However, it can also spread by touching objects, surfaces and fabrics used by someone infected. The CDC encourages handwashing and avoiding sharing objects with someone that has symptoms.

The U.S. Department of Health and Human Services has been distributing monkeypox vaccines for a few months. Hidalgo County has a limited number of vaccines available for those high at risk.

When asked what the City of Mission is doing to spread awareness about the rise in monkeypox cases in Hidalgo County, Mission Mayor Norie Gonzalez Garza said they have not received any notification from the county health department in reference to the case increase as of Sept. 21. She said staff will reach out to Chief Administrative Officer Eduardo Olivarez for updated information.