The Hidalgo County Commissioners Court hopes to solve the illegal dumping problem in rural areas with a trash collection program for residents outside the city limits. The county has not implemented the program yet, but precinct leaders seek feedback from the community.

The commissioners court is holding four sanitation hearings so residents may provide their input on the proposed trash pickup service. At the hearings, precinct leaders give an overview of the problem and potential solutions. Afterwards, the public can provide their perspective on the matter.

“The specifics of the program are still being developed and that is precisely the reason for the public hearings — to ascertain first-hand what problems residents in unincorporated Hidalgo County may be facing without uniform trash collection services,” Hidalgo County Public Affairs Director Carlos Sanchez said. “Ideally, the service would be similar to services provided in incorporated areas of Hidalgo County, including weekly collection, monthly brush collection and quarterly tire collection.” 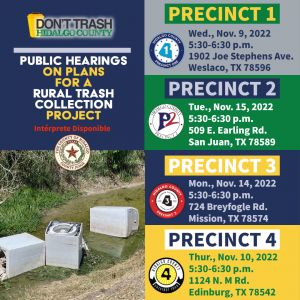 The county reports that the unincorporated areas are growing at a rate comparable to the growth rate of urban areas, according to the U.S. Census data. Sanchez said county leaders believe roughly one-quarter to one-third of Hidalgo County’s total population lives in unincorporated areas — a larger population than any individual city within the county.

And because of the growth in those rural areas, there has been an increase in illegal dumping. But that is not a new problem. Sanchez explained the proposed trash collection program is an idea county leaders have been exploring for years because of ongoing littering. However, due to a state law prohibiting county policymakers from regulating municipalities in extraterritorial jurisdiction, Hidalgo County has limited options to manage the dumping problem.

In 2019, Hidalgo County implemented a drop-off permit-based Solid Waste Disposal Program for residents in rural and unincorporated areas. But that program requires residents to have a proper vehicle for transporting trash at the designated location. The new proposed program would have sanitary workers going to the homes to collect the waste instead.

“Hidalgo County is having significant issues with illegal dumping. Beyond the unsightliness, illegal dumping clogs our region’s drainage system and creates the potential of exacerbating flooding; it creates vector problems and, mostly, is currently costing taxpayers $8 million annually in clean-up costs. That expense is projected to increase to $10 million in just a few years.”