The city of Mission dropped a misdemeanor charge against a former Palmview police corporal last week.

“While stories may be written, while things may be said, this is why we have the system in place,” said attorney Rene A. Flores of Mission, who represented Padron.

Officers arrested Padron in December 2020, when they accused him of drunkenly firing a pistol within city limits. He was charged with a Class C misdemeanor, which is punishable by a $500 fine. 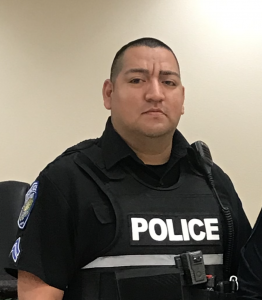 From the beginning, Padron denied any wrongdoing.

The city offered Padron a deferred adjudication deal. He refused.

“He was adamant,” Flores said, adding that Padron wanted to set the record straight.

Padron pleaded not guilty and requested a trial. On Friday, though, city Prosecutor Carlos E. Ortegon filed a motion to dismiss the case.

“We dismissed because, in our investigation, there were conflicting statements,” Ortegon said.

“And so I had no choice but to dismiss,” Ortegon said.

Flores said he interviewed two witnesses. They both said Padron wasn’t the person who fired the pistol.

The first witness said he’d seen Padron with the pistol — but Padron had grabbed the pistol after someone else started shooting. The second witness confirmed that Padron hadn’t fired the weapon.

Both witnesses signed affidavits, and Flores said he provided the city with their contact information.

“I said: ‘Look, here are two witnesses that are going to say Padron didn’t discharge that firearm,’” Flores said.

Palmview fired Padron after the arrest. Padron responded with a lawsuit, claiming Palmview had discriminated against him.

In the meantime, Padron took a job with the La Grulla Police Department.