“I know that I did wrong, your honor,” Alaniz said.

Along with four months in prison, Alaniz must spend two years on supervised release and pay $24,000 in restitution.

Alaniz was a key witness against former La Joya Mayor Jose A. “Fito” Salinas and his daughter, Frances, who participated in schemes to defraud the city, the La Joya Economic Development Corp. and the La Joya Housing Authority. 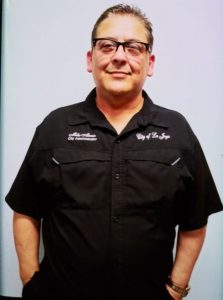 Under the guidelines, prosecutors may file a motion for a reduced sentence if a defendant provided “substantial assistance in the investigation or prosecution of another person who has committed an offense.”

Alvarez granted the motion and sentenced Alaniz to four months.

“I think, historically, they probably would have given someone else probation,” said attorney Rick Salinas of Mission, who represented Alaniz. “But what I’m noticing is the frustration on behalf of the courts with these corruption cases.”

Alaniz graduated from La Joya High School in 1981. After working several odd jobs, he enrolled at the University of Texas-Pan American and earned a bachelor’s degree in social work.

The degree helped Alaniz land a job at Cesar E. Chavez Middle School in Palmview, where he taught math.

In July 2000, the city of La Joya made Alaniz the city administrator. He’d never worked in municipal government before.

Alaniz learned on the job, which came with responsibility for more than 40 city employees and a $2.7 million budget. He also navigated several major political shifts.

In May 2019, though, Alaniz announced his retirement after the FBI started investigating a series of suspicious land deals.

The trouble apparently started during a tax auction in August 2012.

“During that auction, the defendant purchased properties in the Palmshores Subdivision,” Assistant U.S. Attorney Sarina S. DiPiazza said in October 2019, when Alaniz pleaded guilty. “He purchased a couple of properties on behalf of the city at approximately $10,000 apiece. Additionally, at the same auction, he purchased Lot 112 for his own personal use for $9,700 in the same subdivision.”

“At the time of the sale, the defendant knew that the fair market value of Lot 112 was approximately $15,500. However, he used his position as the city administrator to get the city of La Joya, utilizing city funds, to purchase the property at an inflated rate, thereby receiving at least $24,000 that he was not entitled to,” DiPiazza said. “The defendant knowingly effectuated this fraudulent purchase of Lot 112 as the city administrator by obtaining the approval of the purchase of the property from the mayor of La Joya.”

The court delayed sentencing for more than two years, which allowed Alaniz to assist prosecutors with the case against Fito Salinas.

When he addressed the court, Alaniz called the situation an administrative matter he failed to handle correctly. Alvarez, the federal judge, took Alaniz to task.

“This was an intentional act on your part,” Alvarez said, adding that Alaniz purchased the property to provide himself and his family with a financial benefit.

Salinas, the attorney who represented Alaniz, said his client was nervous and misspoke.